Cereal rye is the most planted cover crop in Pennsylvania. It is winter hardy, tolerates late planting, can grow in poor soils, produces tons of biomass, and is easy to source and affordable. Despite rye's numerous benefits, corn growers may rightfully be apprehensive about nitrogen (N) tie-up this spring due to historically high N fertilizer prices.

The C:N determines how quickly the cover crop residue breaks down. The higher the C:N, the longer lasting the residue is. Some benefits to a high C:N include protection for the soil and weed suppression. However, the drawback to a high C:N is N tie-up. 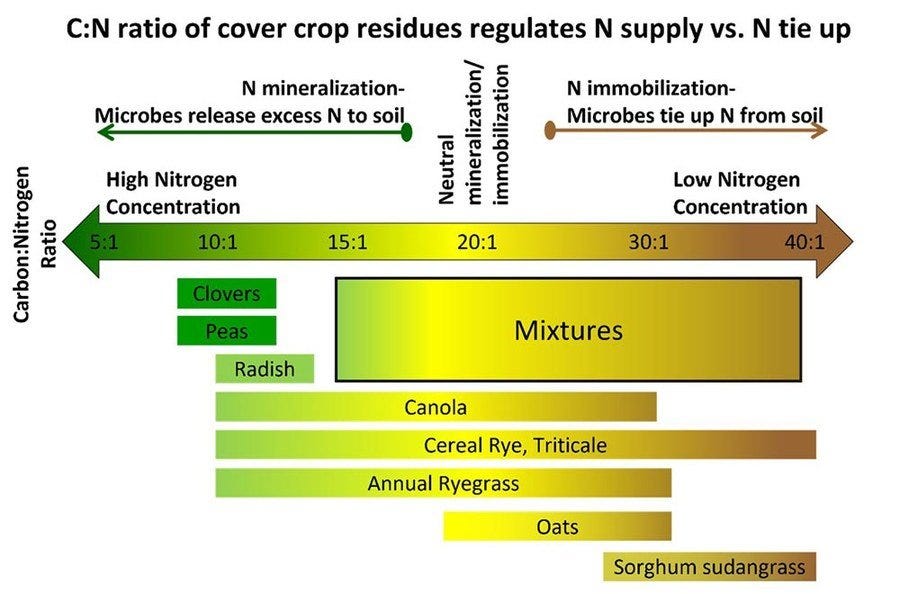 When a cover crop is terminated, the fresh residue is broken down by microbes in the soil. These microbes use N and other key nutrients found in the cover crop residue as fuel sources for the break-down process. However, if there is not enough N in the residue to complete the process, microbes will use N from the soil instead. This is called N immobilization, or N tie-up, and it reduces the amount of N available to the following crop.

The C:N threshold for N immobilization is about 20:1. A leafy, young rye plant may have a C:N of 15:1, while rye at the boot stage approaches 30:1, and after anthesis, greater than 40:1. Recent research at Penn State evaluating the role of cover crop C:N ratio on the N fertilizer requirements of corn suggests that letting a rye cover crop mature from a C:N ratio of 15:1 to 40:1 can increase the N fertilizer requirement of corn by 20-50 pounds of N per acre.

Delaying rye termination until after cash crop planting can allow farmers to maximize biomass and benefits of the cover crop. However, farmers who plant green often wait until rye is flowering, especially those who rely on a roller-crimper for termination. At that late maturity, the C:N ratio is very high and N immobilization is almost guaranteed. Even though there is more overall N in the rye tissues because of the higher biomass, that N is not available to the cash crop in synch with when it is needed. Instead, it is released very slowly over the following year.

For this reason, it is usually recommended to apply an extra 50 units of N at planting when planting corn green to help break down high C:N ratios and supply planted-green corn with adequate N until microbes release N from the breakdown of rye tissues. When the cost of N approaches $1 per unit, the benefits of planting green become overshadowed by the cost of N fertilizer.

Waiting to kill cereal cover crops when planting green means very high C:N ratios at termination. This results in N immobilization, so extra N fertilizer is recommended at planting. N prices are so high this year that it is worth considering earlier termination, to avoid N tie up and save money.

Killing the Most Popular Cover Crops — The Right Way