At the Petty Ranch in southern California, where it sometimes rains less than 5 inches per year, covers are an effective line of defense against dryness.

The 50-acre farm is located between Los Angeles and Santa Barbara. It’s a Mediterranean climate, and Sayer and his forebears have weathered many droughts over the decades. In a good year, the farm gets about 18 inches of rain between November and April. The rest of the year is dry. This past winter, Saticoy saw just 4½ inches of rain.

Petty Ranch’s lemons go into the Sunkist system; they pack their avocados with Mission Produce. The operation is not organic, but the family deploys many sustainable techniques, including the use of beneficial insects, mulching and water management.

Perhaps most critically, Sayer has been using cover crops to help with water infiltration and retention since 2005.

“We found on certain portions of our orchard, we were having a lot of soil compaction and the water permeability was just terrible,” he says. “When we did get rains, we’d have a lot of runoff. Best case, we only get rains half a year — and then, to see lots of it just running off the property and not going into our soil to sustain our trees — that kind of hurt.”

The water that flowed off the land, he adds, was inevitably muddy with topsoil. California’s soil is already low in organic matter. Prior to 2005, Petty Ranch’s soil contained typically around 2.5%. Any loss of soil was costly.

“We wanted to be able to open up our soil and improve our water infiltration, and we wanted to be able to prevent erosion and keep our topsoil in place to help the orchard soil stay strong,” says Chris, who farms with his wife Melissa, his mother Susan Petty and his two sisters, Patty Ryan and Tanya Edwards.

Petty Ranch sits above an aquifer, so groundwater supplies the orchard’s needs most of the year. But groundwater is saltier than rainfall, and in drought years the operation sees a reduction in fruit size and grade. 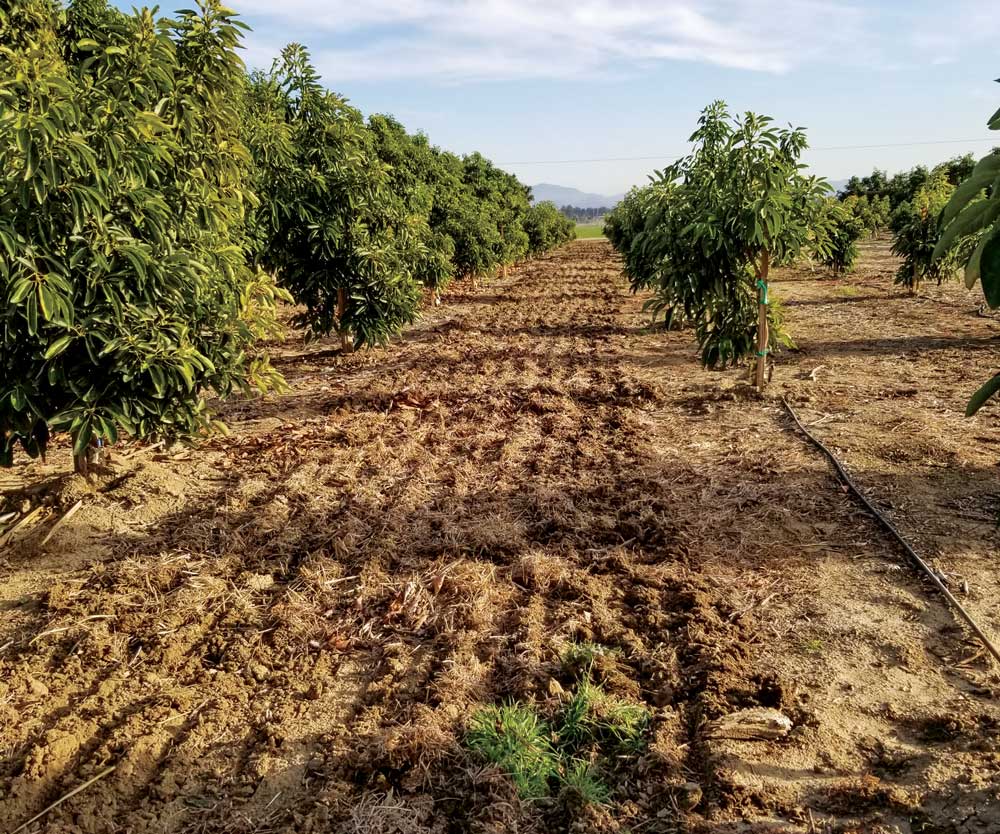 PREP WORK. Prior to broadcast seeding cover crops, leaf litter is disced into the orchard floor between young avocado trees.

The first sign that the cover crop program was having a beneficial effect occurred when a multi-year drought struck just as the program was reaching maturity, says Sayer. He’d done the math and figured that, in theory, the soil should be able to hold 2 inches more moisture than it could previously handle before running off in a rainfall event.

“The day we finally got a good, heavy rain, we got 5 inches over 36 hours, and sure enough, that usually would have caused a flood and we would have had standing water all over the place. But everything was soaking in and staying,” he says.

“The trees are doing better, and we place fewer demands on the groundwater basin. Anything you can do to reduce water use at any time of the year will help throughout the year. Cover cropping and soil building goes hand-in-hand with that.”

Most of the orchard is planted on 20-foot spacing, so the width of the cover crop depends on the maturity of the trees. If the lemon trees are young, the cover cropped area might be as wide as 16 feet. To seed this area requires 2 passes with a broadcast seeder.

The cover cropped area between fully mature lemon trees that are due for pruning might decrease to 6 feet.

In the avocado orchard, cover cropping is used to build soil while trees mature, but once the canopy is closed the leaf litter provides the necessary ground cover.

“Best case, we only get rains half a year, and then to see lots of it just running off the property and not going into our soil to sustain our trees — that kind of hurt…” – Chris Sayer

“We leave everything on the orchard floor both in the lemons and avocados, but the avocados in particular demand that because their roots get into the boundary between the soil surface and the decomposing bottom layer of the leaf litter. Eighty percent of their root structure is within 8 inches of the soil surface. So, we disc in the leaf litter and the cover crop goes on top,” he explains.

Chris says rain is needed to ensure success with his cover crop system. Cover crops rely on a good rain to get started, although a few can get by with a heavy dew, he says.

Sayer orders cover crop seed in the summer to have on hand by October. Ideally, the first rain comes around Thanksgiving, but he waits until rain appears in the 3-day forecast before seeding.

“This past year, we didn’t end up seeding until the first week of January,” he says. “The nice thing about only farming 50 acres is that we don’t have to do everything by the calendar. We can be flexible, and we really only need about 48 hours or 72 hours notice.”

Sayer has used some 20 different cover crop species, and his goal is to try something new every 3 years. His standby is a mix of barley and rye, and often triticale, to build organic matter — although he and his partners have also tried vetch, sunflower and a variety of vegetable species. That includes daikon radish and bell beans. They’ve also planted sugarbeets, which help open up the soil but can attract pests, they’ve found.

“We haven’t done sugarbeets in a few years because that triggered a tremendous explosion in our gopher population,” he says. “We’ll probably do sugarbeets again, but not until we’re sure we have the gophers under control.”

The barley/rye blend offers relatively cheap biomass — between 1-2 tons per acre per year — and grows reliably in Saticoy’s winter climate. 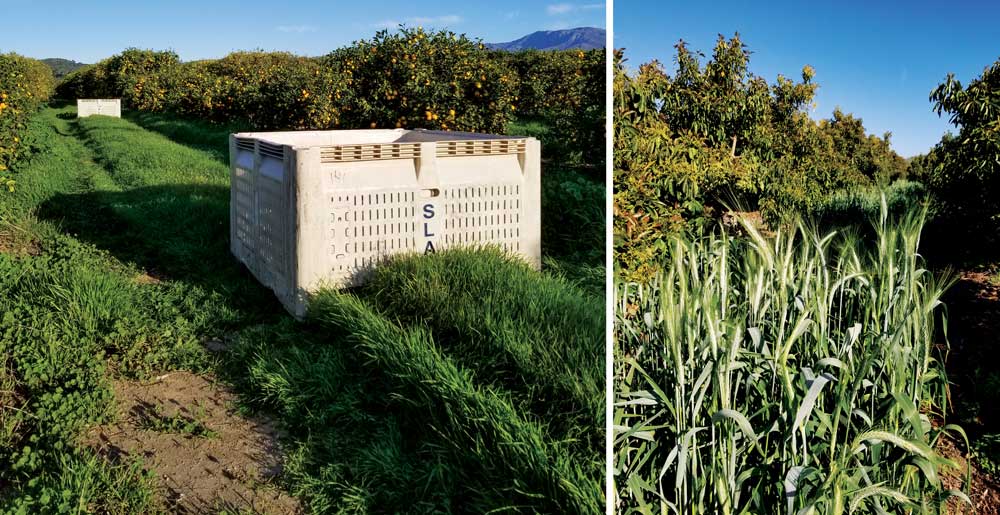 UNCOMMON PRACTICE. Few orchardists in California are using cover crops, says Chris Sayer. Shown here, barley is growing in a lemon orchard before harvest (above) and triticale in an avacado orchard (right).

The family tries to use a limited-tillage approach on the farm to preserve the soil structure unless there are extenuating circumstances. “Usually, we just lightly disc in the rows once a year to create some openings in the top 1-1½ inches of soil,” Sayer explains. “If everything goes perfectly, we disc and seed just a couple of hours apart and are looking for an inch of rain coming within 24 hours so that everything gets settled down and the seeds that are in soil get covered up.”

Despite the clear benefits of cover crops for Petty Ranch, Chris Sayer says very few of his neighboring orchardists — which he estimates at about 5% of lemon growers and even fewer avocado growers — utilize the practice.

Avocados tend to be grown in rocky hillsides, which makes planting and managing cover crops tricky. But in lemons, Sayer believes orchardists’ reluctance to adopt the practice has more to do with a general impression that it’s too complex.

“I want to keep the ground covered as much as possible, particularly during the winter. And then in the summer, we have it mowed down to give a nice bed of straw and decomposing material on the surface as a mulch to shade the orchard floor.

“But if you start reading up on cover cropping an orchard or talk to some of the people who position themselves as experts, it can come across as being really complicated,” he says.

A contact of Sayer’s was keen to attempt it, for example, but gave up after doing some research. “They talked to all the experts they could find about it, and the experts said, ‘You can’t use this seed, you can’t use that seed, you have to do this and that,’ and it ended up seeming so complicated they ended up forgetting the idea out of frustration,” he says.

On Petty Ranch, the cover crop choice basically depends on the seed that’s available with nearby sellers each year. If a particular variety isn’t available one year, Sayer might plant it the next.

“I don’t think it needs to be that tricky. Our permanent crops, our trees, will be there the next year and the year after that. That’s part of the reason I mix things up. Maybe I wanted to plant mustard but can’t find it, but there are lots of bell beans. I take a very unsophisticated approach.”

Some good cover crop education programs have begun in the area, but Sayer believes the industry is lagging behind farmers in grain and field cropping in the Midwest when it comes to utilizing covers. Yet he believes cover crops are a key ingredient to his farm’s resilience. The other ingredient, of course, is water management, as the two are inseparable.

In recent years, Sayer and his partners have taken a focused approach to understanding soil moisture and how to manage it. In 2016, they installed permanent soil moisture sensors so they can monitor water dynamics to a depth of 32 inches.

“We can watch soil monitors and determine that we have 90% saturation down to 8 inches, for example,” he says. “You’ll have the whole root zone well covered in 1-2 hours of irrigation, so we can adjust things a little bit to make sure we’re not watering more than we need to, but we are watering enough.”

The partners take the same careful approach with plant fertility, applying only what they need, when they need it, to avoid having the nutrients percolate into the area groundwater or run off during a rainfall event.

The goal is to build strong trees during the good years, says Sayer, so they’re better able to withstand the inevitable droughts when they come.

“Most of our trees will have a 40-year productive lifespan, so they’ll see 3-5 droughts of various duration. If they’re strong in the good years, they’re better able to withstand the hard years,” he says.

Things That Can Go Wrong With Cover Crops: Prevention and Management

Cover Crops That Can Take the Heat