Building soil nutrients is one of the major benefits of using cover crops, and it’s the benefit of choice for Ryan Pesch and his family. Pesch has used cover crops on his farm since he and his family started Lida Farm in 2004.

Ten years ago, there were as many as 8 community-supported agriculture (CSA) producers operating in the 3 counties surrounding Pelican Rapids, Minn., home of the 4-acre vegetable operation. “I’m kind of the last guy standing,” says Pesch.

A decade ago, a farm stand or farm-share box was one of few options for organic produce, he says. These days, some of those sales have been captured by national chains, so local demand has dropped. But Lida Farm has a waiting list every year, and things picked up even more in 2020 with the COVID-19 pandemic.

“The grocery supply chain fell apart in 2 weeks,” he says. “It changed some people’s views. Every dollar in everyone’s pockets was going to Amazon or Walmart, and I think people realized, ‘That doesn’t seem right! I should think differently about my food supply chain.’”

Given the demand, other producers might have tried to increase the size of their operations, but Pesch says he is always trying to “right-size” things.

“Another person might say, ‘I need to buy 10 more acres.’ But I say, ‘I’m going to stay the course and get more production, get more efficiency out of a similar area and keep tight on things.’ That’s how you make a profit,” says Pesch. 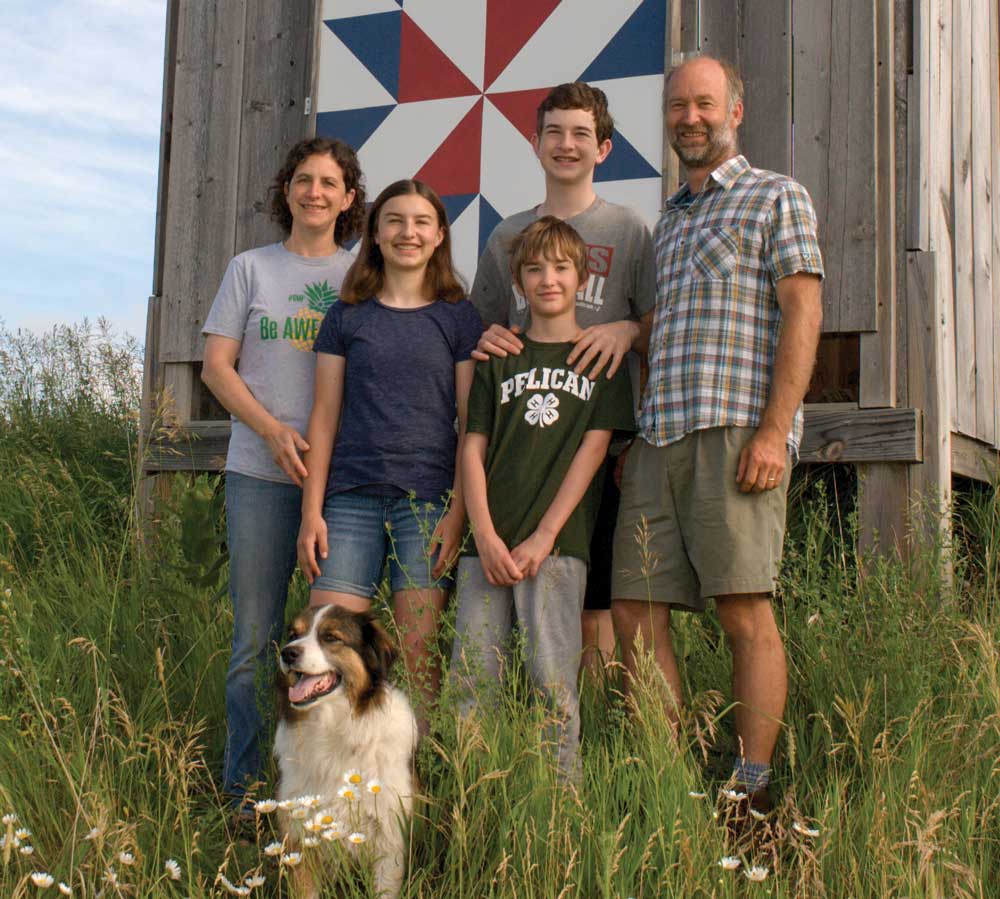 The farm’s product offerings vary each year, but typically include between 150-250 varieties of around 40 crops, including peppers, tomatoes, lettuce, kale, broccoli, cauliflower, kohlrabi, zucchini, and cucumbers. This year, Pesch is making 70 CSA boxes for about 120-130 families on weekly and biweekly memberships.

For the last 7 years, Lida Farm has been certified organic. This year, it isn’t. Pesch is still taking an organic approach but has opted to drop the certification paperwork. Organic certification tracks seed from purchase to when vegetables are sold: certifiers ask for seed and planting records, field logs and sales records for each variety. Last year, his certification paperwork included 186 variety types; the year before included 213.

“This year is the first year in 7 years I’m not doing certification. It’s the most stress-provoking thing I do as a farmer, and that has everything to do with my scale and my style. I think diversity has to be part of the organic system, but you’re almost penalized for diversity,” he says.

“I’m going to plant a cover crop in a zone to keep that part of the field in reserve. I’ll time it out so that when I’m ready, I can use that field…” – Ryan Pesch

But he understands why the extra steps are necessary. “If we’re going to do certification right as an industry, farmers have to do the paperwork. Certification is rigorous, and although I learned through the rigor, at some point I said, ‘I’m going to lose my mind.’”

Lida Farm’s activities go beyond the CSA boxes. The farm has a self-serve farm stand that’s open 24 hours a day, 7 days a week from the end of June through the growing season. Pesch provides produce to Pelican Rapids’ Manna Food Coop, where he also serves as the Coop’s treasurer. This year, he’s running the town’s Friday night farmers’ market. Lida Farm also provides fresh produce on consignment for a bakery in Fergus Falls.

Pesch calls the organic vegetable production world “romantically medieval” in the sense that many producers still learn their craft via apprenticeships under more experienced organic farmers.

Pesch worked as an apprentice on Foxtail Farm near Osceola, Wis., for 2 years from 2000-2001. After this, he and Maree ran a market garden on rented land near the Twin Cities before starting Lida Farm.

The Wisconsin producer Pesch trained under would plant a rye/hairy vetch fall cover crop and sometimes a summer cover crop like buckwheat, and Pesch brought the practice to Lida Farm.

But a major challenge in vegetable production, says Pesch, is finding ways to “squeeze in” cover crops. “You’re harvesting the field by hand, and until you’ve gone through the field, it’s hard to put in a cover crop,” he says. 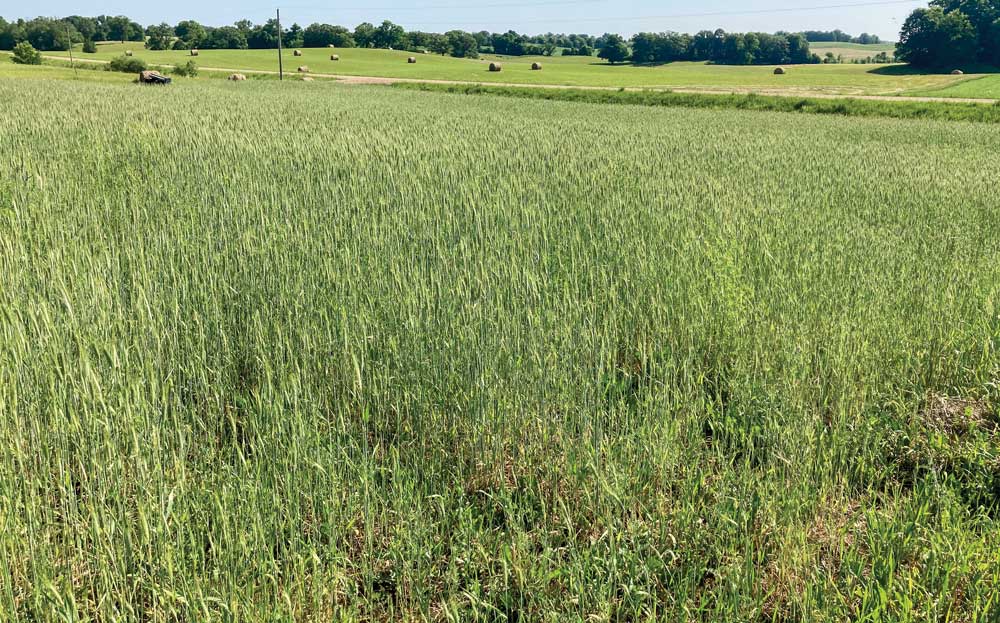 Timing is particularly an issue in the Upper Midwest, where the cover crop planting window is smaller than it is further south: the last frost date in the spring is May 11 and the first fall frost is September 29, making the growing season 141 days.

Because he can’t extract the same loads of nutrients from his cover crops as more southern producers, Pesch uses cover crops primarily to lighten his soil. Many soils in Minnesota’s lake country sit on terminal moraines, where sand, pebbles and rocks were pushed into ridges by glaciers.

Crop producers think in terms of fields, but small-scale vegetable producers think in terms of beds. Pesch uses a combination of flat 6-foot or 30-inch beds, depending on the crop going in — finer-seeded crops like salad greens go in smaller beds because they are more intensively managed, while crops like sweet corn go into larger beds — and remakes them every year. Cover crops are planted in zones based on the future needs of beds in those areas.

“I’m going to plant a cover crop in a zone to keep that part of the field in reserve. I’ll time it out so that when I’m ready, I can use that field,” explains Pesch.

Some years, he’ll plant a cover crop across a 3-4-bed area, leave it to grow for a season and mow it in the fall before planting those beds the following year.

Occasionally, Pesch will plant a spring cover crop blend of red clover and oats with field peas in April to “clean” a bed, choking out weed pressure and building soil, before he plants a fall cover such as a brassica, in the bed in August.

Pesch doesn’t use exact seeding rates. He goes through a 50-pound bag of red clover in roughly 2 years, he says, but it isn’t an exact science. Typically, he plants using his neighbor’s John Deere seeder from the 1920s, although this year he’s trying out a seeder that can be pulled behind his Renaldi EL75 power harrow or directly behind a Grillo walking tractor. 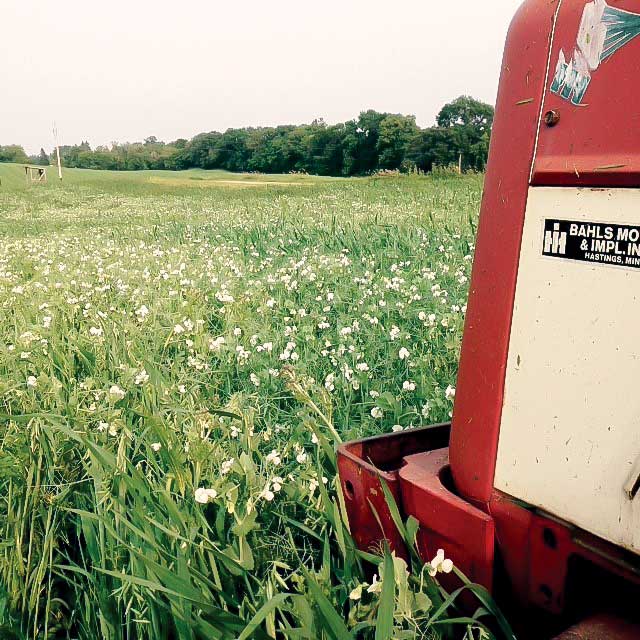 “It’s a drop seeder and it has a ‘hamster wheel’ roller so it packs seed in if you’re putting in a cover crop. It allows me to seed small areas — you can seed a 6-foot bed in 2 passes,” Pesch explains.

The species of cover crops that Pesch uses depends on the zone he’s planting. For ground cover, he uses fall rye; hairy vetch builds soil. Red clover is leguminous and ideally adds some nutrients, but Pesch believes it doesn’t get mature enough in his growing zone to offer much nitrogen before it’s mowed to make way for summer crops.

When it comes to cover crop termination, Pesch has used a variety of methods. Because he wants his cover crops to break down as quickly as possible, he typically flail mows a cover crop and lightly discs it into the top layer of the soil, so it’s slightly incorporated. He leaves this layer to sheet compost for at least a month before planting transplants.

One major issue with the system is that if the freshly mown cover crop doesn’t get enough rain, the layer doesn’t break down and stays “trashy” and impermeable — which makes it especially difficult to plant finer-seeded crops like greens.

“To run a transplanter through oat straw —- it doesn’t work. We’re not out there with big chisel plows, we’re on 60-year-old tractors with intricate equipment,” he says.

For beds where Pesch really needs a finer-textured soil, he’ll bring in bulk totes of compost, layer 2 inches of it on top of the beds and lightly rototill it.

Depending on how the soil is working, says Pesch, he’ll shift crops around. For example, carrots, with their tiny seeds and high nutrient demands, go in the best beds. Vining crops like winter squash or pumpkins, or larger-seeded crops like sweet corn and green beans, can be planted in trashier beds.

Managing the fertility needs of each one of Lida Farm’s 218 beds — and the hundreds of vegetable varieties they support — is a full-time job. But the Pesch family is up to the challenge.

“When I moved here on the organic frontier, I was the one guy in a sea of conventional growers. I thought, ‘They’re going to think I’m nuts.’ But they see I put in 60-80 hours a week and they say, ‘I respect him as a farm operator because I can tell he works as hard as everyone else.’”