Cover Crops: The Final Piece of the Water Quality Puzzle

On a clear, late November day 60 years ago, 11-year-old Maurice Buessing was out getting the cows home from pasture on the family dairy operation near Baileyville, Kan.

“Dad had oats planted after wheat and it was knee-high, and it was like candy to cows. We lived on a hill, and I looked around and I could find nobody else that had anything nice and green to feed their cows,” Buessing recalls. “That was an a-ha moment where I realized what we could do for late fall grazing instead of hay.”

For the Buessing family, utilizing cover crops has always been a cultural practice. He started cover cropping in the 1970s on his own Axtell, Kan., operation a few miles down the road — although, he says, it wasn’t called ‘cover cropping’ back then. He was planting oats after second-year wheat, or after chopping corn. He added turnips as well, and in the 1980s he started interseeding red clover. Eventually, he started using oats or triticale ahead of soybeans.

The biggest shift came in 2007, when he planted soybeans into a living cereal rye cover crop. “That was a huge success, and we’ve been doing it ever since,” he says.

Buessing now farms on about 1,000 acres near Seneca, Kan. He rents out a quarter section to his son Dale and another quarter to grandson Derek. Another son, Bill, farms a third quarter section, planting primarily corn and cereals and grazing cattle and sheep. They manage their own farms, says Bill. He and Dale farm additional acres besides those they rent from Maurice, but they share ideas and machinery and help each other at harvest.

The Buessings’ operation is in the Black Vermillion River watershed in Marshall County in northeastern Kansas. Until recently, the region was an area of special concern to state conservation authorities due to water quality issues in Tuttle Creek reservoir, which plays a large role in the state’s water supply system.

The reservoir is fed by several tributaries including the Black Vermillion River, says Andy Lyon, director of conservation for the Kansas Department of Agriculture. 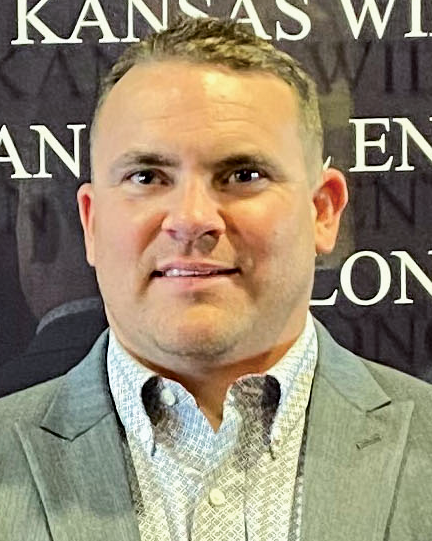 “In that area, it’s actually becoming uncommon to not have a cover crop before soybeans…” – Andy Lyon

The area’s land-use pattern is primarily row-crop agriculture and the predominant system is a corn-soybean rotation. In the post-World War II period, a lot of channel modification to the Black Vermillion River took place, instigated both by local authorities and individual landowners keen to reduce flood risks to their land, says Lyon.

When channels are straightened there can be erosion of the riverbed. And that, in combination with intensive row-crop agriculture in upland areas, contributed to major problems with sedimentation and excess nutrient loading in the Tuttle Creek reservoir, which filters into the Black Vermillion River.

“We’ve lost around 40% of the reservoir’s storage capacity to sediment, which fills the space that water used to fill, and that reduces water storage that can be utilized during drought conditions by municipalities and industries,” says Lyon.

Conservation efforts have been in place in the state since the 1930s, but it wasn’t until the 1990s that the state ramped up the targeting of resources and programming to high-priority regions like the Black Vermillion River watershed, he adds.

Typically, these programs involve cost-sharing with agricultural producers for practices that run the gamut from installing grassed buffers and waterway systems to terraces and, in more recent years, cover crops.

“Cover crops are very important in a complete conservation system,” Lyon says. “Conservation systems — rather than single practices — are what improve environmental outcomes. We don’t think that a water quality improvement is completely attributable to cover crops, but we think that’s a final piece of the puzzle.”

Since programming began, cover crop adoption has increased dramatically in the region. At least 50% of the acres surrounding the river system in Marshall County and nearby Nemaha County have cover crops, and the Black Vermillion River system has dropped off the EPA 303(d) List of Impaired Waters for the state of Kansas.

Officials say it’s a major success story underscoring the importance of planting cover crops for minimizing erosion and nutrient runoff — and it speaks to the role of individual producers in instigating cultural shifts.

“In Marshall County, a lot of the conversation at the coffee shop is about cover crops and how it’s going on farms and what works and what doesn’t,” says Lyon. “It’s pretty socially accepted in that area and it’s actually becoming uncommon to not have a cover crop before soybeans.”

It’s not only producers who are spreading the word about cover crops, says Lyon — ag retailers, as well as cooperatives, seed companies and even equipment dealerships, have also helped promote soil health principles and put knowledge and machinery to work to help producers in the region successfully implement cover crops on their farms.

But farmers — who Lyon refers to separately as both ‘innovators’ and ‘champions’ — are key to spreading the message.

Lyon says there are 3 barriers to cover crop adoption: economic and agronomic barriers are two that are often discussed. But he feels social barriers are perhaps the most significant.

“We know that farmer-to-farmer information sharing is the way that we address those social barriers, so we’ll try to continue to support producers like Maurice,” he says. “We know that the people producers trust the most are other producers. Government folks are way down the list.”

The Buessings share information about agronomics and economics during field demonstration days, but they freely admit they’re still learning themselves.

What prompted them to go whole-hog with cover crops was the first No-till on the Plains Winter Conference they attended in Salina, Kan., in 1997, says Maurice. The family had just purchased a brand-new field cultivator, but after that first conference they sold it. They attended 19 of the following 20 conferences and slowly started adopting methods they’d learned about in presentations: zero tillage, then cover crops and planting green.

“We don’t think that a water quality improvement is completely attributable to cover crops, but we think that’s a final piece of the puzzle…” – Andy Lyon

Bill has run a side business as a cover crop seed dealer for neighboring farmers for more than a decade. He started it initially because cover crop seed was hard to find in the area, and he kept it going when neighbors got into cover crops themselves.

“I’ve started using hairy vetch, crimson clover, and triticale in the last year as a soil primer for corn. It depends on the needs I’m trying to fulfill, whether it’s for supplemental grazing, or I want extra nitrogen (N), or I want biomass to keep the ground cover,” he says.

Originally, Maurice wanted to try cover crops to eliminate erosion and build his soils, so he primarily used cereal rye before soybeans. The benefits of the practice have quickly outweighed any associated costs. 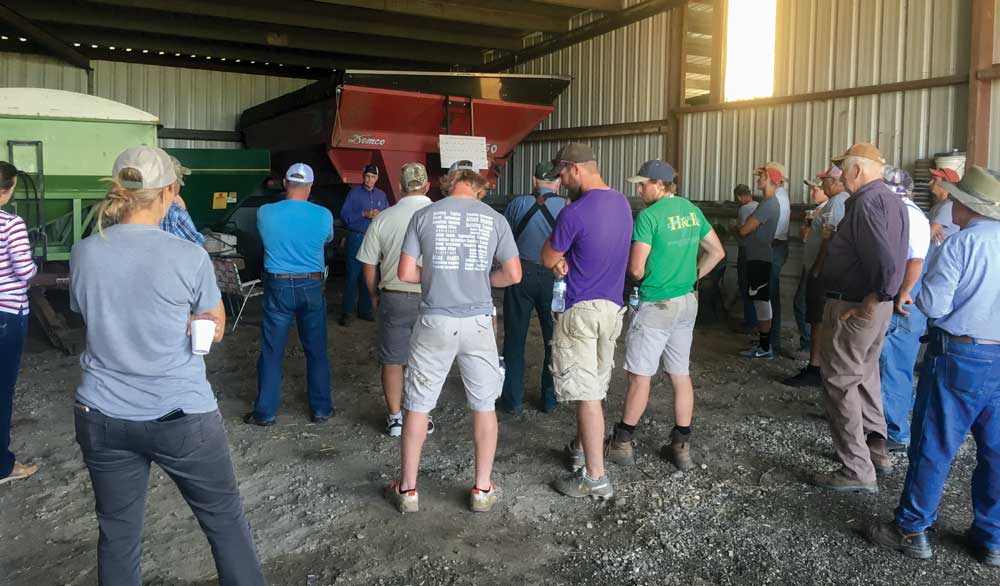 OPEN BOOKS. On field days, Maurice and Bill Buessing share financial details of their operation to demonstrate to other growers how cover crops can increase profitability. Photo courtesy of the Kansas Department of Agriculture.

“When you plant corn and soybeans you only capture carbon about 3-4 months a year. But with the winter cereal, we can capture carbon and build soil throughout the year,” he says. “And then we have a better infiltration rate, and the water that does leave a field is so clean it looks like you could drink it.”

Maurice says that although cover crops fell out of favor with farmers in the post-World War II period, it was long practiced by farmers before synthetic N sources became widely available. When the family decided to sell their new cultivator more than 20 years ago, they were called “crazy” by their neighbors, he says.

It wasn’t long, however, before the benefits of cover crops became obvious.

The summer of 2012, for example, was a very dry year. Maurice had planted cereal rye in the fall of 2011. It was a very early spring, he says, and by April the cereal rye was over shoulder-high in places.

“We laid that tall rye down and planted into that, and that year our soybeans made 9 bushels per acre more than in areas where we didn’t put a cover crop down. That year, I made over $150 per acre gross by having a cover crop,” he says.

Typically, they average a third of that, but the system still pays for itself, and carries so many associated benefits that it doesn’t make sense not to use cover crops.

In a dry year — which happens perhaps 3 years out of 10 — they really shine, says Maurice: in a hard rain, most of their neighbors without a cover crop will see runoff, but wherever there’s a cover, there’s no crust and the water infiltrates.

On hot and dry days, cover crops shade the ground and protect the corn’s root systems. When the ground is cooler, the corn gets less stressed. Bill says 2017 was a good example of this, as his neighbors had only about 35% of their ground covered, while Maurice’s ground was 85% covered by shade and cover crops. Right across the drive, his corn looked better.

Maurice and Bill still have some neighbors who hate using cover crops and think they’re crazy, says Bill. But the tide of opinion is changing.

“It’s not as easy as a corn-soybean rotation,” admits Maurice. “There’s a challenge and a learning curve to it, but I believe there’s a benefit to accepting that challenge and learning from it, and in the long run, it’ll pay off.”

Cover Crops Could Fit into the Soil Health Puzzle