When used in combination with reduced tillage and diverse crop rotations, covers can restore farm soils to a more healthy and productive state.

Problems with soil degradation impacting agriculture go all the way back to ancient Greece. Many of today’s growers have the same problems, but they are now armed with the knowledge and tools needed to reverse the trend, says David Montgomery, author, geologist and professor of Earth & Space Sciences at the University of Washington.

“The plow fundamentally alters the balance between soil production and erosion, dramatically increasing the pace of soil erosion,” he says. “It does that by leaving the ground bare and vulnerable to erosion by water or wind after plowing is complete and before the next crop, or weeds or a forest — or whatever’s coming back on that piece of land — grows back.”

Montgomery says mankind has degraded a quarter to a third of the world’s agricultural land since the last Ice Age and the land is no longer used for agriculture. Another one-third of the world’s farmland may meet a similar fate by the end of this century, all while the expected world population is expected to increase by about 50%.

The most recent United Nations global soil assessment in 2015 concluded humanity loses about 0.3% of global food production capacity each year to soil erosion and land degradation.

“Natural rates of soil production are down in the fraction of a millimeter a year, so it takes centuries to replace an inch of topsoil that could be lost in just a couple of decades,” Montgomery notes.

He cited a paper in the journal Sustainability that concluded soil organic matter content of many soils in North America is only about half of the level that they were at the time they were converted from forest or prairie to farmlands.

Depending on the location and practices, many farms have gone from soils that contain 4-5% soil organic matter to less than 2%, Montgomery says.

The Piedmont region of the southeastern U.S. is an example of large amounts of erosion impacting agriculture, with erosion taking 4-10 inches of topsoil across most of the area since colonial agriculture began several centuries ago. “They only had 6-12 inches of rich, black topsoil to begin with in this region,” he says.

The result is that the remaining khaki-colored, salt-filled barren subsoil is devoid of organic matter.

“When we were taught about the roots of plants, we were taught that they were sort of straws that take up nutrients from the soil, but we were really only learning half of the story,” says Montgomery. “It turns out that roots are a two-way superhighway.”

As nutrients are entering plants, exudates are being sent out by the roots. In fact, a third or more of all compounds generated by plants through photosynthesis are exuded back into the soil.

“They’re things like carbohydrates, proteins, lipids or fats,” he says. “What does that sound like? It sounds a lot like food. They’re basically pushing food out into the soil — and it’s not to feed themselves, it’s to feed the microbial life in the soil.”

The microbial life then produces metabolites, which are metabolized by the microbes into hormones that are taken back up into the plant roots because of the vicinity of where they are produced. Those hormones influence plant growth.

“These are symbiotic relationships. There are partnerships between life in the soil and the botanical host,” says Montgomery. “Mycorrhizal fungi have similar kinds of partnerships with plants, where they prospect for things like phosphorus, pull it out of soil particles, unlock it from the oxide states it had been in in the soil and bring it back to the plant in exchange for sugary exudates.” 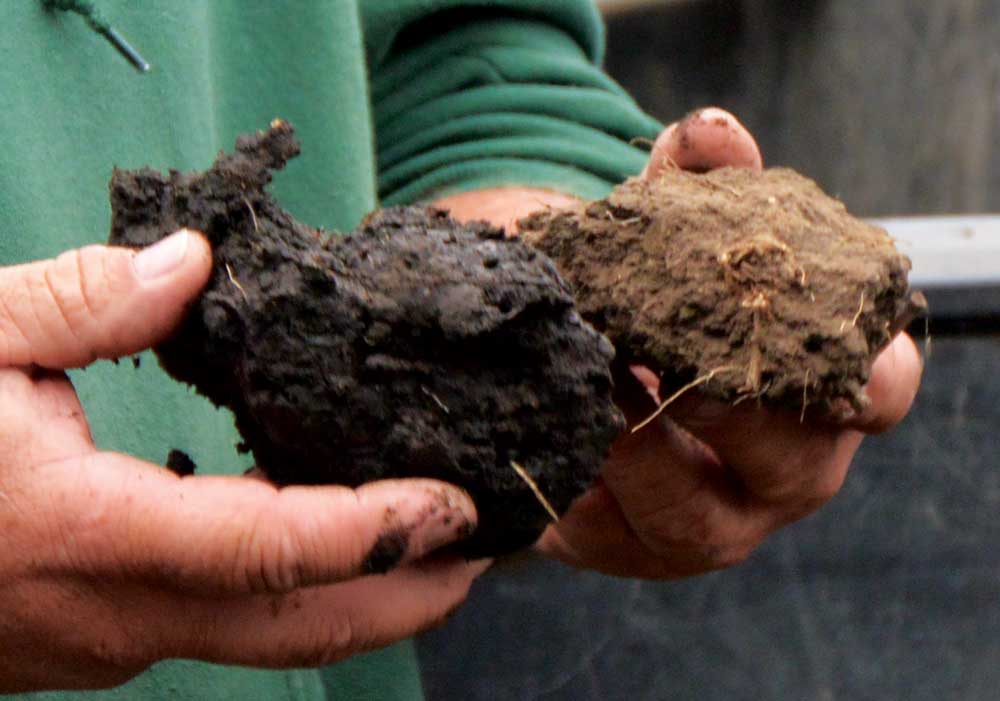 IMPROVING SOIL HEALTH. Gabe Brown’s focus on regenerative agriculture has drastically increased his organic matter from less than 2% to 10% in 17 years.

He says that this microbial ecosystem is a critical type of symbiosis that helps tee up plant defense systems and helps maintain plant health.

“The simple story is that when an insect nibbles on a plant, that plant can put out exudates into the soil that microbes in the rhizosphere metabolize into compounds,” Montgomery says. “The plant takes that back up and that makes the plant taste bad for that particular insect.”

These partnerships in the microbial world are integral to maintaining the health of our crops.

“Cover crops can restore fertility and profitability to degraded land,” says Montgomery. “The diversity of cover crops in crop rotations give the microbes a diverse community to interact with.”

Montgomery shared an example of growers in South Dakota who reduced their use of diesel, fertilizer and pesticides by more than half after starting to use cover crops — without compromising yields. Some growers were managing up to 20,000 acres with the practice of cover cropping.

That’s certainly a recipe for more profitable farming. It can also be a way to produce more food to feed a hungry, growing global population. One example Montgomery shared was in Kumasi, Ghana.

“They get their diversity through the diversity of crops they plant, and essentially, everything they’re planting is an edible crop,” he says. “They’ll grow 6-8 different crops in the field at the same time.” 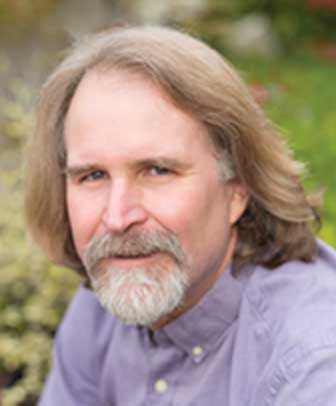 “Cover crops can restore fertility and profitability to degraded land. The diversity of covers in crop rotations give soil microbes a diverse community to interact with…” – Dave Montgomery

Utilizing cover crops can help improve a farming operation’s economics as well, according to Montgomery. He gave the example of Carroll, Ohio, no-tiller Dave Brandt, whose neighbors do full tillage and use 200 pounds of nitrogen (N) per acre, spending about $500 per acre.

“That’s not a great business model,” Montgomery says. However, Brandt’s farm practiced no-till and had been using covers for more than 15 years, with no agrochemical use.

“He was not spending as much on diesel because he was not tilling,” says Montgomery. “He was spending $320 an acre and harvesting more than his neighbors.”

Combining the 3 principles of conservation agriculture, minimal disturbance and a diversity of cover crops can be an innovative, environmentally friendly and profitable way to go forward, according to Montgomery. “The difference is the farmer,” he says.

Gabe Brown is another example Montgomery uses to demonstrate going beyond the principles of conservation agriculture to integrate animal husbandry through intensive rotational grazing.

“Basically, he’s been bringing in cattle to graze off his cover crops. Then chickens come and eat the insects that sprout from what the cows leave in the fields from their manure,” he says. “Gabe dislikes spending money on fertilizer and pesticides, and instead, he’s selling beef and eggs. It’s better for his bottom line.” 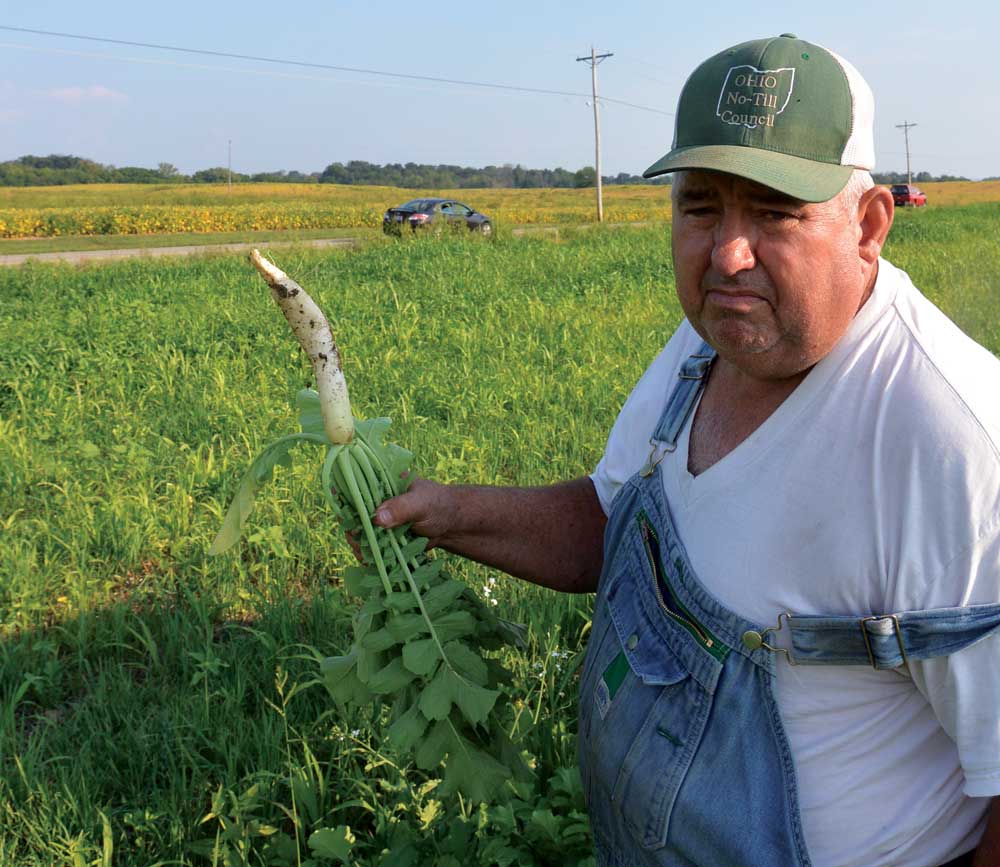 NO TILLING, MORE MONEY. Carroll, Ohio, no-tiller Dave Brandt has been using no-till and covers for more than 15 years with no agrochemical use, saving money on inputs.

“Gabe went no-till in 1993,” he says. “They started adding diversity to their crops and integrated cover crops in 1997. That’s the point where their soil organic matter really started to go up. They then went to multi-species covers and then integrated livestock.”

“Intensive farming practices can restore health and fertility to the world’s cropland soils. But to do so, we need to follow a different set of principles than what has been common under modern conventional agriculture,” says Montgomery. “Ditch the plow, cover up and grow diversity, as a way to combine no-till, cover crops and diversity.”

This recipe for building healthier, fertile soils must have the combination of principles to be effective at rebuilding agricultural soils.

“Increasing the practices that result in increased yields, reduced fossil fuel and pesticide use also increases soil carbon,” he says. “It can also lead to better water retention and therefore, better crop resilience to drought and less pollution in terms of less use of highly soluble nitrate and phosphate fertilizers.”

Montgomery believes that the agriculture industry is on the cusp of what could be considered the next agricultural revolution, in terms of prioritizing thinking about soil health as the underlying common denominator for building healthy, fertile, profitable farms going forward.

“We need to start thinking about agricultural practices through the lens of soil health, and cover crops play a huge role in trying to help convert degraded lands back into the verdant lands that they have been,” he says. “I see no reason why we can’t increase the fertility of our farmland to be better.”

How These Magical ‘Weeds’ — Cover Crops — Turned Around a Struggling Orchard

[Podcast] Cover Crops Around the Globe