Buffering the Soil with Long-Term Covers

Jeff Olson is protecting the soil and improving water infiltration with a mixed bag of application methods and plenty of patience.

Pictured Above: GOING UP. Jeff Olson has seen his soil organic matter improve from using cover crops, in addition to more earthworm activity and making his soil easier to work with.

Jeff Olson isn’t afraid to step outside his comfort zone. A 5th-generation corn and soybean farmer in Winfield, Iowa, Olson attributes part of his willingness to take risks and try new things to his years of experience.

This has served him well as he’s integrated cereal rye as the foundational cover crop on his 1,300-acre farm — especially this year when southeast Iowa had particularly wet weather.

He certainly sees the benefits of employing cover crops -— not only in terms of his yields, but also how they have reinvigorated the soil. When Olson first started using cover crops in the early 1990s, he was striving to use covers to build organic matter and soil health — a goal that is still in progress but has been successful thus far.

“If you can stop that raindrop from hitting the soil with cover crops, you’ll prevent soil erosion where the roots hold the soil,” Olson says. “The cover crop adds another species of crop into the mix. It puts different living roots in the soil.”

Olson started no-tilling in 1981, but ridge-tilling seemed to work better for him. He tried some covers on the ridge, but his real commitment to incorporating cover crops began 15 years ago as somewhat of a snap decision.

“I had some late built terraces on a rental farm, and some of the late corn there got rootworm beetles, so we decided to take it for silage,” Olson says. “It was on a hillside and exposed to the road, and it didn’t look very good.”

A friend had some extra cereal rye seed available, so he decided to plant some on the hillside and a few other spots on the farm. Olson saw an almost immediate yield improvement.

“The next year, that ground that had cover crop on it was 3- or 4-bushels better yield on the beans, compared to the ground that didn’t have the cover crop,” Olson says. “I thought it might be something, so we started doing more cover crop work.”

Today, he grows 400 acres on a corn-corn-soybean rotation, with the other 900 acres as a corn-soybean-non-GMO corn-seed soybean rotation. Last fall, he seeded more than 1,000 acres in organic transition that had red clover, oats and turnips through a mix of aerial seeding, broadcasting with fertilizer and planting in 15-inch rows with his 16-row Kinze planter.

“Any mix of species roots in the ground year-round help the soil heal, hold tight and absorb water better. We used to use crimson, but we don’t get a lot of growth in the spring before we have to kill it,” Olson says. “Clovers haven’t been a real good addition to the species mix. Mostly we plant the cereal rye for the growth, root mass and weed control.”

Some of the ground Olson farms was heavily tilled by previous generations, and he’s working to put organic matter back into the soil.

“If you can stop that raindrop from hitting the soil with cover crops, you’ll prevent soil erosion where the roots hold the soil…” – Jeff Olson

“On the poorer ground that was abused, we’re fighting back from the high 2s and low 3s and getting back in the high 3s for the soil organic matter levels,” Olson says. “The real flat black stuff, we’re mostly in the 4s. Nothing in the 5s yet. We’re still gaining on all that.”

Although he’s gained 1 percentage point in soil organic matter since using cover crops, Olson attributes some of that increase to changes made by the soil test labs in their testing methods, which he says inadvertently increased the organic matter levels in all the lab’s clientele.

Olson says using cover crops has also made some of the soil easier to deal with.

“I still have some fields that are ponds,” he says. “That’s another reason to keep the cover crops on longer. When it’s wet, the cover crops will dry things out. The soil is just mellower. You can get in there quick to that cover crop ground. We have a pretty high clay content in some of this soil, so it could be sticky. But you get the cover crop in there, and the soil health is more manageable.”

This year, because of the wet weather, he found himself running behind on planting — which led to planting green and increased cover crop growth. His rye has grown especially tall, which Olson says creates a bit of hassle in the fields. Lots of pollen gets into his tractor radiator, and he has to use a generator and a compressor to blow out the radiator every couple rounds of planting. But Olson says it’s worth it.

“There are all these roots that matter in the soil,” he says. “This is pretty big stuff. We’re going to get nice soil cover that keeps the soil cooler all summer and saves moisture, and the crops need that.”

These days, Olson uses a highboy he built himself to start seeding cover crops around Labor Day. He built the highboy by attaching a Valmar air seeder to an old seed corn cutter and building a 16-row folding boom with hoses to drop seed between the rows. He also utilizes aerial seeding, particularly for the corn fields. 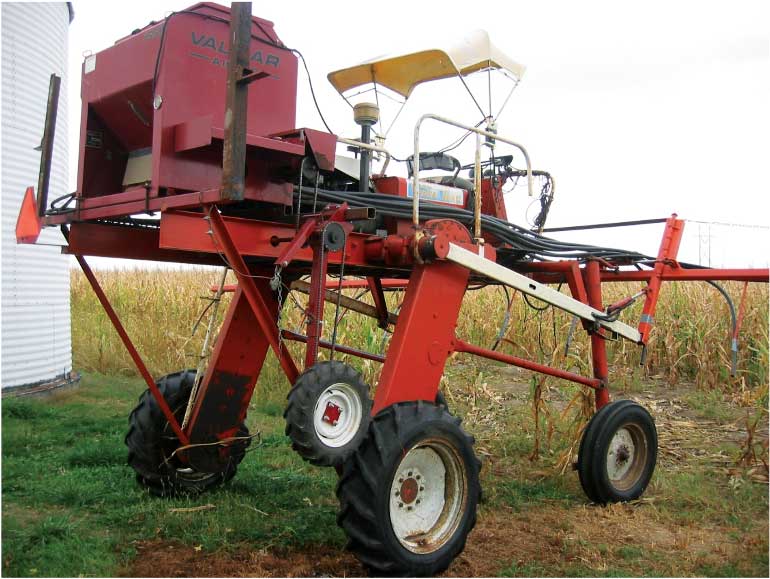 BUILT BY OLSON. Jeff Olson built this highboy by attaching a Valmar air seeder to an old seed corn cutter and building a 16-row folding boom with hoses to drop seed between the rows.

“For the soybean ground, flying on is a real timing issue,” Olson says. “If you fly it on too early the leaves drop and smother it. The sprouts get covered up and the cover crop could die. But if you fly it on too late it may not germinate”

Olson doesn’t usually plant cover crops on the harvested soybean ground until late October or early November, and sometimes he waits as late as December.

“Even that late, it still comes on in the spring,” he says. “That’s why cereal rye is such a go-to: you can hardly do it wrong.”

The highboy isn’t the only piece of equipment Olson built himself. He has an agricultural engineering degree, and he relies on that background quite a bit on his farm.

“We’ve built a lot of things, and we experiment with different things, which is fun,” he says. “I like doing stuff differently.”

Olson is pleased to still be using equipment that’s decades old, and to be able to fix much of it himself. He uses Kinze planters — a 16-row corn planter and an 8-row bean planter with 7 rows added on to make 15 rows altogether — along with Yetter row cleaners.

Covers are helping Olson economize by stretching his feed dollar.

“We’d love to have enough fences to graze all the cover crop,” Olson says. “It’s nice to have the ability to get some of your money back by saving your feed costs -— get those cows out on the cover and eat it down. We could get $30-40 an acre of seed costs back really quick with grazing. And they spread the manure, too, so there’s less hauling.”

Cover crops are also helping Olson focus on improving his soil health while caring for it properly to ensure that the land is still useable for the future generations.

“We’ve got so much to learn about soil health,” he says. “I’m not sure you’re going to be able to buy it in a bottle. A lot of these companies come along with their special elixirs that may make better yields, but the minute you don’t use it, it’s back to how it was. You can’t take advantage of the soils. They’re fragile.

“We can’t just not utilize the ground, but we need to take care of it or in another 150 years, it’ll be all gone. We’ve lost half the organic matter already. If we can do something right, like the cover crops, maybe that’ll help.”

Olson worries about the longevity of no-till and cover crop farmers who are new to this style of planting, given the excess moisture this spring. He says it wasn’t as problematic for conventional tillers, who warmed up their soil and expedited the drying out process when they tilled. However, for him and other farmers who rely on cover crops, that hasn’t been the case.

“It just didn’t warm up for those of us with cover crop and residue on,” Olson says. “The crop took forever to dry out and get up. There may be some people worried about that in the future. It doesn’t take too many bad experiences with no-till and cover crops to turn you around and get you to say, ‘I’m not going to do that again.’”

However, Olson hopes that won’t be the case, and that farmers will persevere with cover crops, despite the challenges.