UNIVERSITY PARK, Pa. — Planting and growing a strategic mix of cover crops not only reduces the loss of nitrogen from farm fields, protecting water quality in the Chesapeake Bay, but the practice also contributes nitrogen to subsequent cash crops, improving yields, according to researchers.

The economic benefits of taking cover-cropping to the next level are important because the benefits will convince more corn, wheat and soybean growers in the Northeast and Mid-Atlantic regions to adopt the practice, the researchers said. Those cash crops are grown over large acreages mainly to feed livestock such as dairy and beef cows, hogs, and poultry. 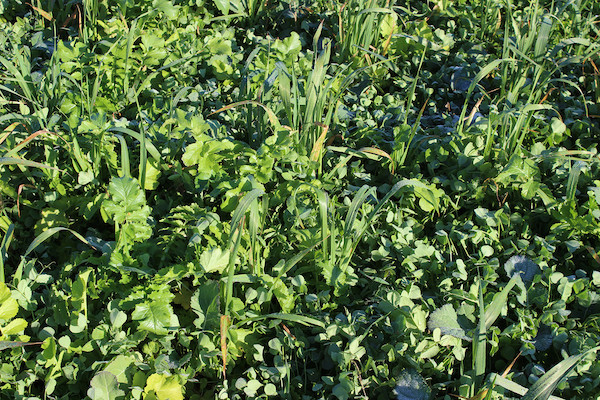 Researchers tested mixed-species cover crop stands such as this one to see if they could balance the nitrogen-fixing and nitrogen-scavenging capabilities of individual species. Individually, cover crop species excel at either reducing nitrogen leaching or increasing nitrogen supply to cash crops. But they fail to excel at both simultaneously. (Photo by Catalina Mejia, Penn State Univ.)

"Cover crops are one of the main tools we have for reducing nutrients in the waters of the Chesapeake Bay — they have the potential to be agricultural nitrogen regulators that reduce leaching through soils and then deliver nitrogen to subsequent cash crops," said Jason Kaye, professor of soil biogeochemistry. His research group in Penn State's College of Agricultural Sciences has been studying cover-crop species for nearly a decade.

Yet regulating nitrogen in this way has proven difficult, because cover-crop species excel at either reducing nitrogen leaching or increasing nitrogen supply to cash crops, but they fail to excel at both simultaneously. Researchers tested mixed-species cover-crop stands to see if they could balance the nitrogen-fixing and nitrogen-scavenging capabilities of individual species. 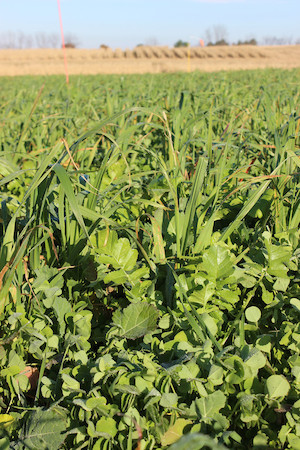 The research's results, published this month in PLOS One, show clearly that cover-crop species selection and mixture design can substantially mitigate tradeoffs between nitrogen retention and nitrogen supply to cash crops, providing a powerful tool for managing nitrogen in cropping systems, Kaye pointed out.

"The mixtures were all very good at reducing pollution, but their impact on yields was limited," he said. "Mixtures that performed best are the ones that had a higher proportion of legumes and mixed in a little bit of the grasses such as rye. Mixtures that include cereal rye dramatically decreased pollution because grasses establish root biomass that holds nitrogen and provides microbial activity in the soil."

The process in which cover crops keep nutrients out of streams, protecting the bay, and pass along nitrogen to cash crops is straightforward. Kaye noted that in the fall after a cash crop is harvested, there is nitrogen in the soil that could go to the Chesapeake. A cover crop can take up that nitrogen and then, when the cover crop is killed in the spring, the nitrogen in the tissues of the cover crop are decomposed by microorganisms in the soil and passed on to the next cash crop, increasing yields. 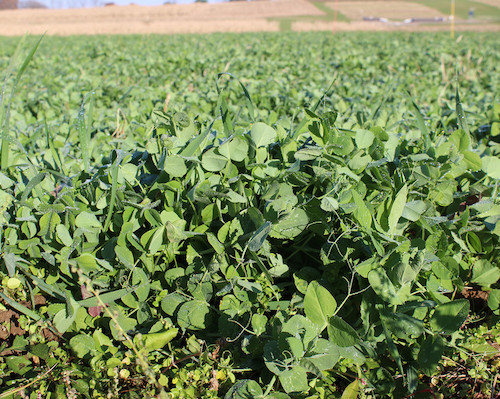 Legume monocultures such as medium red clover and Austrian winter pea (shown here) increased nitrogen uptake in cash crops the most but weren't as effective at preventing nitrogen leaching from fields as grasses, such as cereal rye and summer oats.

The research findings may hold timely significance for Pennsylvania organic feed-grain producers, Kaye believes. Cover crops are especially important in organic systems in which tillage is used to manage and kill weeds and cover crops. In those situations, reducing erosion in disturbed soil is critical.

"Organic agriculture is growing very quickly in Pennsylvania," he said. "One example is that Bell & Evans recently expanded organic poultry operations in the state. So, farmers potentially have a new and expanding market for feed grains that are grown organically. Incorporating cover-crop mixtures into their rotations will help them be more productive without increasing nutrient pollution."

Finding Detailed Information on the Attributes of Cover Crops