Cereal rye is used in Nebraska as a cover crop to reduce erosion and improve soil health. Other studies in the U.S. have shown that cereal rye can provide food and habitat for soil microbes which in turn increase microbial populations. Increasing soil microbial abundance can provide many benefits such as nutrient cycling and soil aggregation.

The purpose of this study was to quantify cereal rye impacts on soil microbial communities in corn systems in eastern Nebraska using the fatty acid methyl ester (FAME) test. We hypothesized that microbial abundance would increase when rye was planted as a cover crop.

What Cover Crop Experiments Were Carried Out?

The trials were conducted at the Haskell Ag Lab (HAL) near Concord and the Eastern Nebraska Research and Extension Center (ENREC) near Mead. There were two rotations at each site [continuous corn (CC) and corn-soybean (CS)] and two treatments [a cereal rye cover crop and a control (no cover crop)].

Cereal rye (Figure 1) was planted in the fall of each of the past four years and terminated the following spring, two weeks before planting of the next crop. No other field operations occurred between planting in fall and sampling in the spring.

The FAME test involves the hydrolysis of microbe cellular membrane lipids into fatty acids (Figure 2). The functional groups attached to the fatty acids are identified by a gas chromatograph through peaks. The peaks are biomarkers for certain microbes. 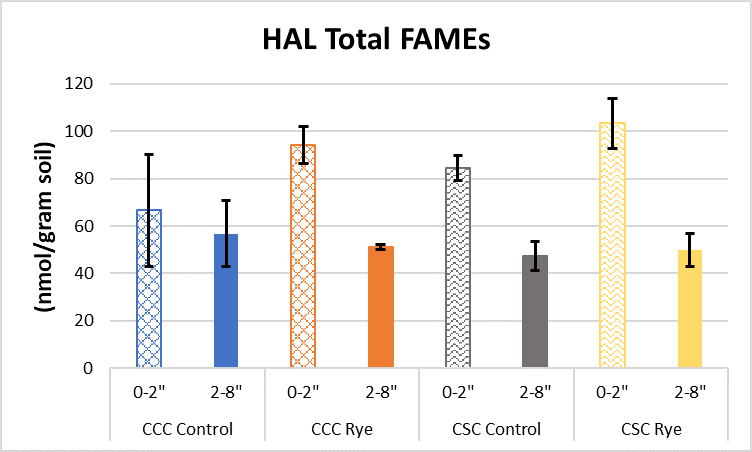 The total microbial biomarkers across cropping systems and sampling depths at HAL. 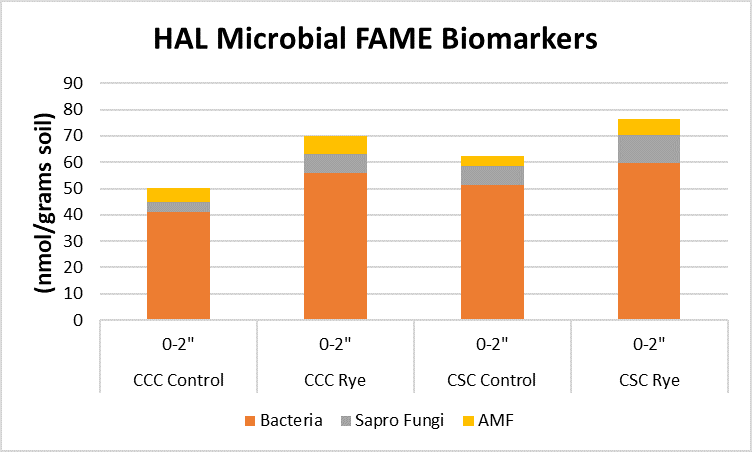 The proportion of bacteria, saprophytic fungi, and arbuscular mycorrhizae (AMF) FAME biomarkers in the 0-2 inch soil depth at the Haskell Ag Laboratory site near Concord.

Plots were sampled in 2018 after corn in each phase. Error bars indicated standard deviation.

What Did We Find?

Whether corn was rotated with soybean had little effect on the abundance of microbes at both sites (Figure 3); however, growing a rye cover crop at HAL increased total soil microbes in both continuous corn and corn-soybean in the upper two inches (Figure 4).

From 2 to 8 inches, the population of microbes was virtually the same. When looking at different groups of microbes, the population of bacteria, saprophytic fungi, and AMF were all increased when growing a cover crop compared to a control. At ENREC, we observed the same trend of higher microbial biomass, but there the trends were not significant. (ENREC data is not shown.)

How Does This Information Apply To Farms?

Overall, cereal rye appears to boost the microbial community in the upper 2 inches of the soil. Farmers may gain improved soil aggregation, nutrient cycling, and other soil health benefits from the increased microbial abundance.

This project was made possible by the USDA NIFA Agriculture and Food Research Initiative: Education and Literacy Initiative–Undergraduate Experiential Learning Fellowship Program and by the University of Nebraska-Lincoln Department of Agronomy.

Elise Elizondo is one of nine undergraduate students completing an Integrated Agronomic Systems Fellowship at the University of Nebraska-Lincoln in summer 2018. A junior majoring in plant science at Pennsylvania State University, she hopes to conduct research on food insecurity after graduation.