The middle to end of September is a good time to establish cover crops by broadcasting seeds into corn or soybean before harvest. Broadcast interseeding before harvest allows cover crops to capture more sunshine, growing degree days and rainfall than drilling after harvest.

Previous studies have shown that cover crops in eastern Nebraska usually have greater productivity when they are established before harvest than drill-planted after harvest. Cover crops with more biomass will better reduce erosion and run-off. High amounts of cover crop biomass mean more organic matter is returned to the soil.

When it comes to selecting a seeding rate for broadcasting cover crops, there is little research-based information. Broadcast seeds do not have good seed-soil contact which reduces the seeds’ ability to take up water necessary for germination. Thus, stand counts of broadcast cover crops are often lower than those of drilled cover crops. Could increasing the seeding rate overcome low stand counts and improve cover crop productivity?

We tried to answer this question by carrying out field experiments at the Eastern Nebraska Research and Extension Center near Mead and the South-Central Agricultural Laboratory near Clay Center in 2016/2017 and 2017/2018 in corn and soybean fields under no-till management. Our cover crops were cereal rye, variety Elbon, and hairy vetch, variety not stated. The research plots measured 20 by 30 feet, so we broadcast by hand instead of using equipment.

Table 1 contains cover crop management and sampling dates. For rye, seeding rates (pure live seed) were 60 lb/ac, 90 lb/ac, and 120 lb/ac. Hairy vetch seeding rates were 40 lb/ac, 60 lb/ac, and 80 lb/ac. In the fall, we determined cover crop stand counts by counting the number of plants in two 5×1 ft frames in each plot. In the spring, we measured productivity by clipping biomass in two 5×1 ft squares per plot, drying and then weighing biomass (see table 1). We used analysis of variance to find statistically significant differences (α = 0.05). 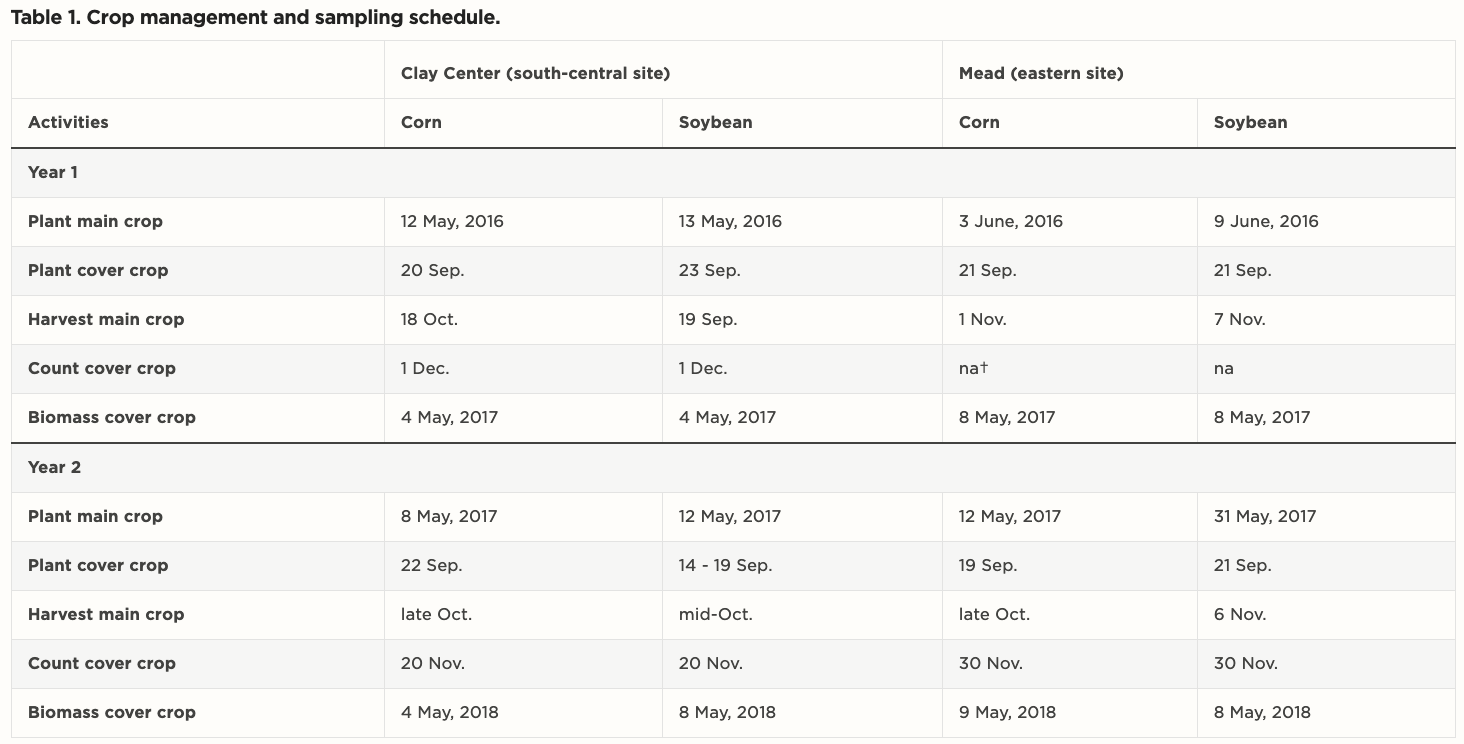 On average, in rye plots, 13% of broadcast seed emerged, with stand counts of 6 plants/sq ft. In vetch plots, 30% of seed emerged, and there were about 5 plants/sq ft. Rainfall within a week after broadcasting is critical for good establishment and was greater at the eastern site than at the south-central site. As a result, more seeds emerged at the eastern site. Stand counts increased with increasing seeding rates. 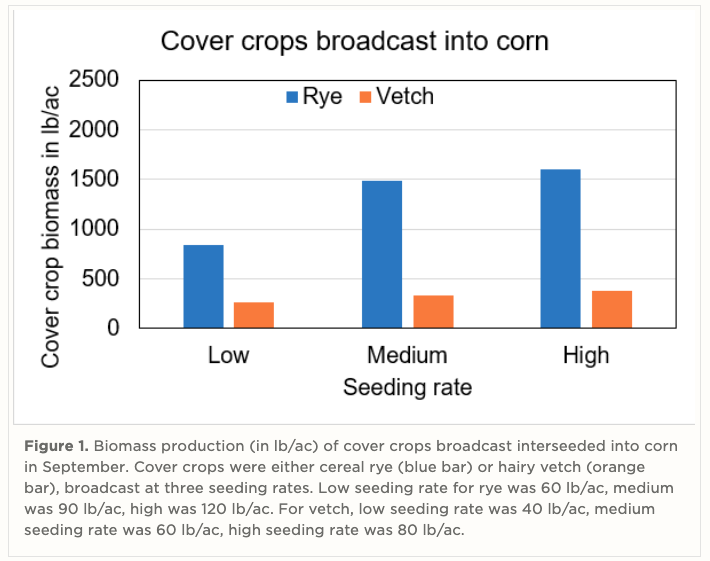 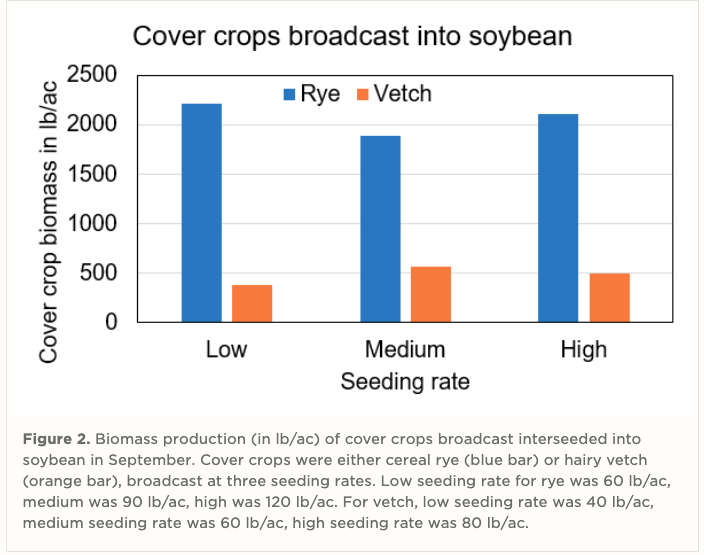 With increasing seeding rates, seed costs of course increase. Table 2 shows the cost of seeding each cover crop at the three rates – while rye is one of the most inexpensive cover crops, hairy vetch is much more expensive. Considering the cost, it is important to give it optimum conditions for success, such as planting it early and inoculating the seed.

Table 2. Cover crop seed costs at each of the three seeding rates. Seed costs are the average calculated from the cost of seed per lb obtained from three regional seed dealers.

Cover crops tended to produce more biomass when established in soybean than in corn, but this was not statistically tested. Rye in corn stubble showed signs of not receiving enough light, as it was lighter in color, had longer stems, and fewer tillers than rye in soybean stubble. Fall tillering is associated with greater spring biomass and may be the reason why cover crops planted into soybean were more productive than those planted into corn. Rye can also compensate for low stand counts by tillering, which explains the lack of response to increased seeding rates. On the other hand, the greater amount of residue and taller stalk remaining in corn fields may preserve more soil moisture and may protect from wind, thus benefitting cover crops in dry and cold sites.