An increasing number of growers are ‘planting green’ or have asked questions regarding this practice. ‘Planting green’ means the corn or soybean is planted directly into a growing cover crop (most often a small grain like rye or wheat) without killing it by herbicide or mechanical means first. Research on this topic is limited but we’ve received enough questions that we thought it would be helpful to share what we know, have learned, or observed regarding planting green.

A rye cover crop can impact corn in several ways, for example by tying up N, by reducing soil moisture prior to planting corn, by increasing pest pressure, and by allelopathy. Rye, like many plants, releases allelopathic chemicals to defend itself against competition from other plants. These chemicals work by inhibiting the germination and early growth of seeds, which can be seen in the weed suppression potential of rye cover crops. For several years, we’ve heard about the potential allelopathy effect cereal rye can have on corn planted into it. To avoid the potential allelopathic effects, often it’s recommended to kill the cereal rye at least 2 weeks before planting corn because of this. But can allelopathic chemicals from rye affect corn? What we do know-studies investigating whether rye cover crops impact corn germination have mostly been done in laboratory settings. One study found that extracts from allelopathic rye reduced corn root length, but another study found no effects. It is hard to say whether allelopathic effects contribute to slower growth and reduced germination that can sometimes be observed in corn in the field. For one thing, corn has a large seed, making it less likely to be affected by allelopathic chemicals. Also, allelopathic chemicals quickly degrade in the soil, so a one to two week timespan between rye termination and corn planting should ensure that there are no allelochemicals in the soil when corn germinates.

Although it is clear that rye releases allelopathic chemicals, we don’t know whether it is enough to impact corn. However, there may be some factors that could increase the risk for allelopathy from a rye cover crop:

No-till termination of rye compared to tillage-incorporated rye. Incorporation seems to speed up the degradation of allelopathic chemicals.

If your soils have low silt and/or low organic matter content. These particles bind allelochemicals which makes them ineffective.

While the potential effects of allelopathy are worth noting, there’s several challenges with terminating rye two or more weeks before corn planting. As we think about the typical growing conditions for cover crops following harvest, there is often little opportunity for much growth going into the winter season. Most of the growth is in the spring. Killing the rye at least 14 days before planting may not allow for much rye growth or results in delayed planting, either way reducing the potential benefits from cover cropping. In addition, weather conditions have not always been conducive for effective cereal rye termination. Growers have shared the difficulty of planting through the partially decomposed (described as ‘mushy’) cover crop. Growers also noticed corn planted into these conditions often came up slow and had a yellow, sickly look to it for a time.

Growers that switched to planting green, say it was much easier to plant compared with planting into the decomposing-dying cover. They also note the corn also tended to look less yellow or sickly.

In a series of studies being conducted in Wisconsin, planting green combined with late chemical termination of cereal rye cover crop (15 days after planting) did not reduce soybean yield as compared to termination at planting time, early termination (15 days before planting) or no cover crop treatments at three locations in the first year of the study. Moreover, late termination allowed for higher cover crop biomass accumulation which led to enhanced suppression of troublesome weeds (i.e., Ambrosia spp. Amaranthus spp., Chenopodium album).

In spite of these observations, planting green is not for everyone and one needs to assess the risk of doing so. To minimize these risks here are a few practices that have been effective for some growers:

Apply nitrogen in a starter fertilizer in furrow or 2X2 with corn when planting green. In some cases it is thought the yellow coloration of corn planted into a cereal cover may be due to nitrogen tie-up rather than allelopathy.

Wait for the corn or soybean seed to germinate before terminating the cover crop.

If irrigation is available, have the irrigation system ready to go prior to planting in the event you need to add some moisture into a dry seedbed.

Risk Management Agency Guidelines allow for planting green and are based on ‘best management practices’ for different zones and for irrigated or non-irrigated ground. You can read more at https://www.rma.usda.gov/Topics/Cover-Crops and NRCS Guidelines Version 4. For crops with a contract change date of June 30, 2019, or later, starting with the 2020 crop year.

The growing cover crop will continue to remove moisture until terminated. The seed bed may lack moisture at planting, which is of greater risk for non-irrigated fields and those with irrigation allocations.

In 2017, wheat stem maggot was an issue in some fields where growers planted green. The frequency of damaged corn plants in fields ranged from 1%-60% with some farmers reporting losses of 30 bu/ac in fields with a high number of infested plants. We haven’t seen this problem to that extent since. However, it is something for which to be aware. The following CropWatch article shows photos of wheat stem maggot for scouting purposes. We haven’t seen them in the York/Seward/Clay county areas at time of writing this article. Additional photos can be seen at this blog post from Jenny Rees.

For green-planting, burndown, termination, and residual herbicides are often applied at the same time. There are a few factors to consider in this situation. Whenever tank mixing herbicides it is important to check herbicide compatibility and antagonism. One example of antagonism is the reduced efficacy of glyphosate that occurs when tank mixed with atrazine. It is also important to think about how residual herbicides behave in the environment to optimize their efficacy when sprayed or green cover crop biomass (Table 1). Residual herbicides require about 0.5 to 1.0 in of rain/irrigation to move into the soil solution and be available for weed uptake and control. In addition, herbicide solubility, soil absorptivity, soil pH, soil organic matter, soil microbial activity, precipitation amount, and herbicide rate can all affect how long an herbicide persists in the soil. A previous CropWatch article highlights how many of these factors are affected by excessive spring rainfall. In the case of green planting, herbicide solubility is particularly important to consider. Residual herbicides need to be in the soil to be effective, but when sprayed over cover crops much of the spray falls on the cover crop leaves and residue. In many ways this is similar to appling residual herbicide on a no-till field with heavy residue. If herbicides have low water solubility they will tend to remain on plant leaves and residue even after rain or irrigation occurs, however herbicides with high water solubility will wash off these plant materials and into the soil. For example, a product like Calisto has a high water solubility (2200 ppm) and would easily wash off cover crop biomass and into soil, but sharpen has a very low water solubility (0.003 ppm) and even with irrigation or high precipitation, would still remain on the cover crop biomass significantly reducing its efficacy in the soil (Table 1). 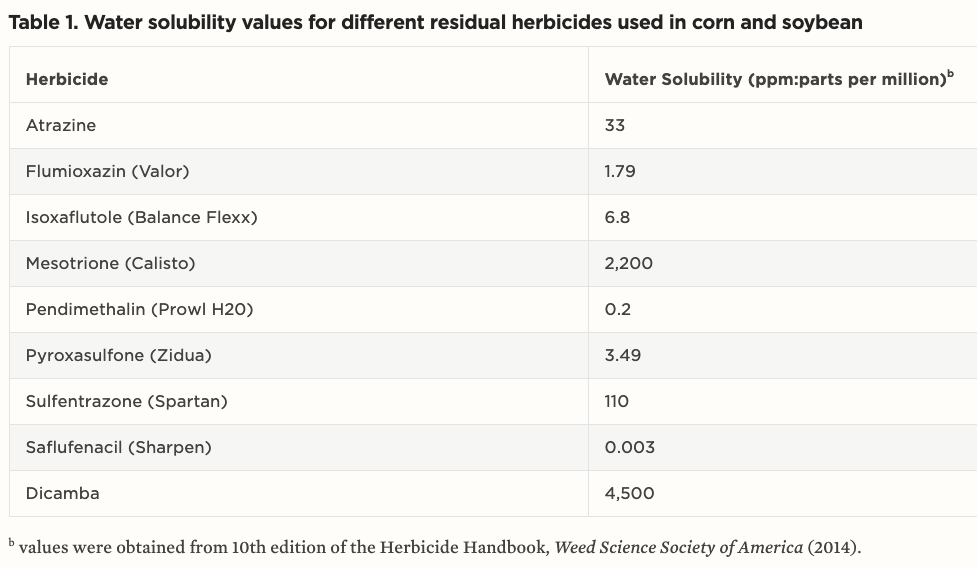 An observation the past few years is when the full rate of a residual herbicide is applied to taller cereals (12” or greater), the cover crop canopy can reduce the herbicide from getting down to the soil. We’ve seen weed escapes in these situations. Some growers have found better luck when they apply their residual with their burndown early before the cover gets much growth. Another consideration would be to split apply your residual with part at the time you kill the cover and the rest later if a post is needed. Otherwise, the full residual could be applied after the cover has been terminated. The downside is the additional cost of a second pass.

Nebraska and Wisconsin farmers were surveyed in early 2020 regarding their successes and challenges from planting green. The target audience was those who already use cover crops. A quick look at the responses show that more than half (53%) of farmers indicated that they used this practice for planting both corn and soybean. Most farmers reported that they observed none or minor impacts of planting “green” on crop emergence, yields, allelopathic reactions, pests (disease, insects, weeds), or fertility. We recently conducted a survey of farmers in Nebraska and Wisconsin to learn about their successes and challenges from green planting.