Cover crops have been gaining a reemerging acceptance over the last decade, with very few producers disagreeing about the potential soil health benefits of adding cover crops to their farming operation. However, with low commodity prices producers are trying to reduce expenses on inputs, especially on inputs with a varying or unknown return. This leaves cover crops in a peculiar place, with a somewhat difficult to measure or unknown monetary return from increases in soil health, fertility, and nutrient availability. This can leave some producers questioning, “How can I use cover crops and see an immediate return on my investment?” Recent research from separate departments at South Dakota State University are pointing towards one answer, livestock integration.

During Spring 2017, we conducted a farm level survey on adoption of conservation practices and precision technologies in South Dakota. Of the nearly two hundred survey respondents, mostly from the Eastern half of South Dakota, 51% raised cattle in some form, either beef or dairy. Of those livestock producers, 94% grazed crop residue, but only 39% grazed cover crops. Additionally, of the total respondents, 31.3% used cover crops in their operation in 2016, with 64.5% of them using cover crops with livestock integration.

The producers were asked to score the importance of several reasons influencing their cover crop adoption decisions as follows: (1) Not Important, (2) Slightly Important, (3) Moderately Important, and (4) Very Important. We also asked non-adopters to score a list of reasons why they chose not to use cover crops on their operations. The scores and rankings for each group presented in Table 1 and Table 2 show that “Improves soil health”, “Increases farm productivity”, and “Improves water availability/water conservation” scored high among adopters, while “Planting time conflicts with harvest of cash crops” and “Satisfied with current practices” score high among non-adopters. It should be noted that the all of these rankings were based off of the producer’s perceptions. For example, while non-adoption producers ranked “Not Profitable” 4th on the rankings with a score of 2.37, they likely cannot substantiate the score. One interesting finding was that “Helps with livestock integration” was relatively lower on the list for all cover crop adopters. However, as we stated before, only 64.5% of cover crop adopters used them with livestock integration, primarily because they don’t have livestock. By separating out the segment of producers without livestock, the difference in adoption reasons between the aggregate of cover crop producers (Table 1) and those using with livestock emerges (Table 3). 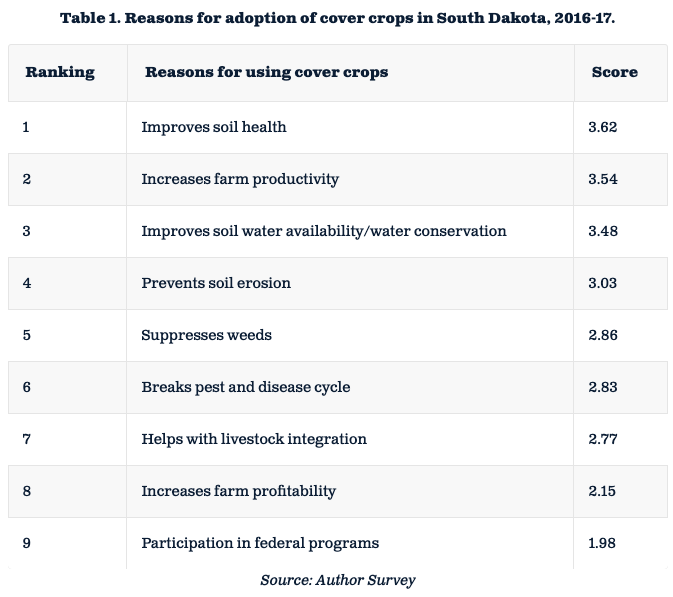 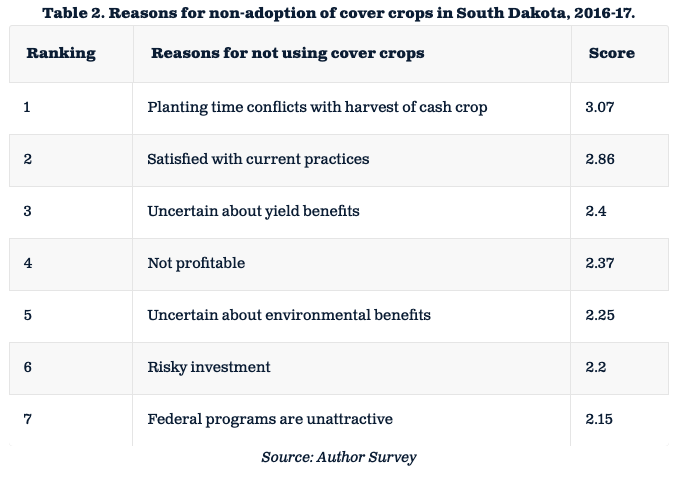 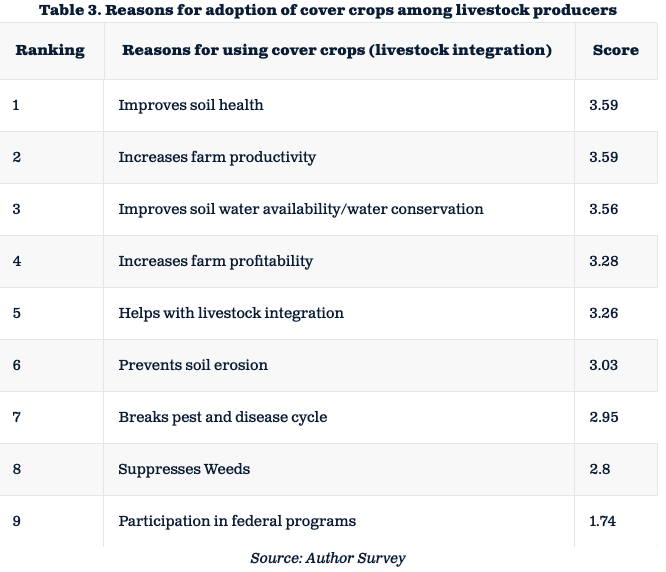