Red clover can be an excellent green manure that fixes nitrogen, suppresses weeds, and increases corn yields. As a slow-growing cool-season legume, it is suitable to undersowing into winter small grains in early spring. It continues to grow after small grain harvest and can be terminated in the fall or following spring before corn planting.

In 2011/2012, 2012/2013 and 2013/2014, we grew red clover in an organic soybean-winter wheat-corn rotation near Mead, NE with the goal of providing N to the following corn crop. The results from the drought year 2012/13 are not included because red clover failed to grow. We compared red clover to a control that did not receive N fertilizer but was disked 2 to 3 times to keep it weed-free. Soils at this site are silty clay loam.

Winter wheat ‘Overland’ was no-till drilled into soybean stubble in mid-October and medium red clover ‘Marathon’ was frost-seeded into standing winter wheat in mid- to late March with a Vicon broadcast spreader at a rate of 20 lb/ac. Frost-seeding is a method of broadcasting where seeds are spread onto frozen ground or snow in late winter or early spring and are worked into the ground through the freezing and thawing of the soil. Winter wheat was harvested in July. Half of the red clover plots were mowed once in early September and the rest were not mowed. Red clover was terminated by disking in the fall (October) or spring (April). Corn was planted two weeks after clover spring disking. Corn did not receive any fertilizer and was managed organically.

The frost-seeded red clover had good emergence but little growth before wheat harvest. It did not impact wheat yield in any year (average wheat yield was 57.7 bu/ac). Once wheat was harvested, red clover grew rapidly. By August of both years, just before mowing, red clover had about 2,000 lb/ac of biomass (Fig. 2, 3). By the fall, it produced around 2,500 lb/ac except for the unmowed red clover in 2011/12 which reached 4,900 lb/ac biomass. The higher productivity was probably due to the greater rainfall in July and August of 2011/12 than during the same period of 2013/14. Rainfall during the rest of the March to October red clover growing season was near normal in both years. Spring biomass was high in the unseasonably warm spring of 2011/12, and much lower in 2013/14. Red clover biomass was 1.9% N in the fall and contained 61 to 96 N lb/ac (Table 1). In the spring, red clover biomass was 3.9% N and contained 31 to 131 N lb/ac. We did not measure how much of red clover biomass N was taken up from the soil and how much was fixed, but other studies found that about 75% of N in undersown red clover was from N fixation (Drinkwater and Schipanski, 2011). Using these numbers, we estimate that in 2011/12 red clover fixed 72 lb N/ac by the time of fall termination and 98 lb N/ac by the time of spring termination. In 2013/14, fall-terminated red clover fixed 46 lb N/ac and spring-terminated red clover fixed 23 lb N/ac. 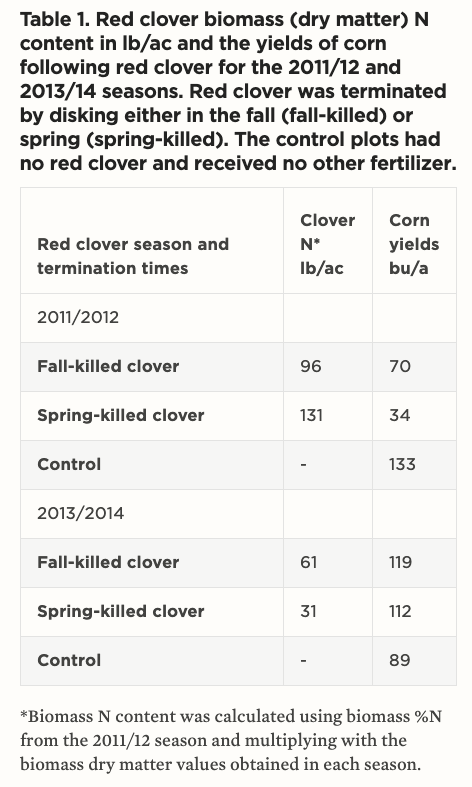 Control plots were disked for weed control, but there was no tillage in the clover plots. Mowing the red clover reduced weeds in 2011/12 (Fig. 2), but weed pressure was generally greater in this year due to above-average July and August rainfall. By the spring, no weeds were present in the red clover plots. In 2013/14 all red clover plots had less than 100 lb/ac weed biomass in the fall and spring (Fig. 3), indicating red clover’s potential to suppress weeds. 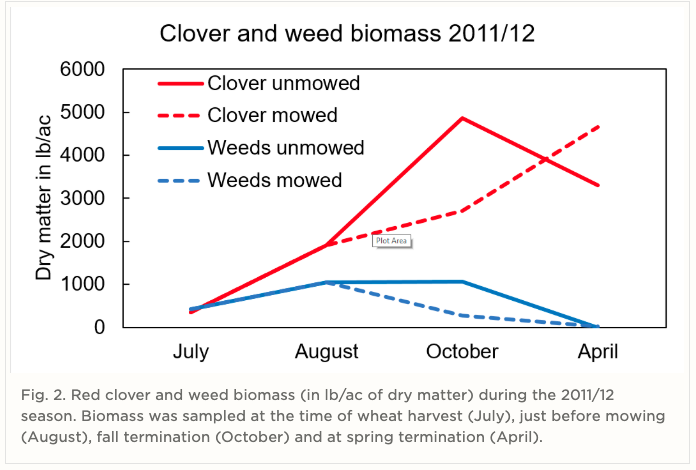 Red clover impacts on corn yields were variable. Corn yields were generally low because this was an organically managed trial that did not receive other fertilizer or recently applied manure. Red clover in 2011/12 contained much N, but that N was likely not used by corn. During the drought year of 2012, corn grown after red clover likely suffered from soil water deficit due to water use by red clover which reduced corn yields compared to the control (Table 1). Corn yield was especially low after spring-terminated red clover which probably left a greater soil water deficit. In 2014, a year with more “normal” rainfall, red clover increased corn yield compared to the control, likely due to the added N from red clover. 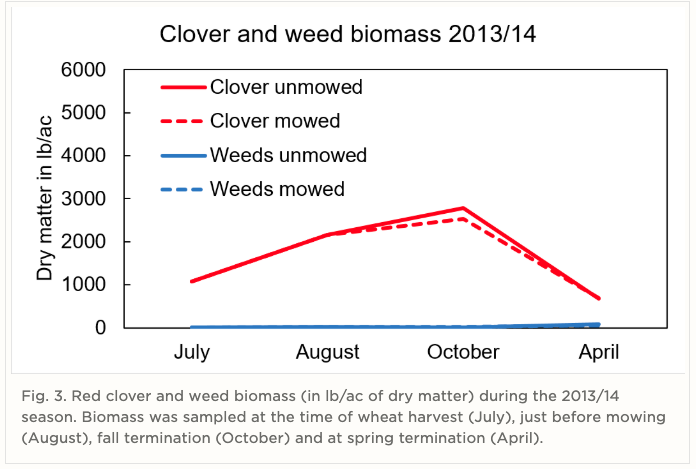 Undersowing red clover into winter wheat can help control weeds after winter wheat harvest and provide some N to next year’s corn crop. In years with average precipitation, growers can expect red clover to contain about 80 lb/ac of N, with the majority of N coming from fixation. For high corn yields, clover should not be the only N source. Further, terminating red clover in the fall may allow for more time for decomposition as well as soil water recharge. We are continuing our research with undersown red clover and are now investigating its role as a pollinator food source in conventional crop fields. Results from this study will be available later this year.