In a down ag economy, growers may be wondering whether cover crops are worth the expense.

But Rulon Enterprises in Arcadia, Ind., finds covers do more than pay their way in their no-till system of 20-plus years.

At the 2015 Iowa Cover Crops Conference, Ken Rulon explained the costs of cover crops for his family’s operation in Arcadia, Ind., and the return on investment they’ve received from pairing covers with their long-term, ‘never-till’ system.

Ken stresses that his analysis is from data and assumptions for their farm, and other no-tillers may have different results based on their personal desires and farm attributes. 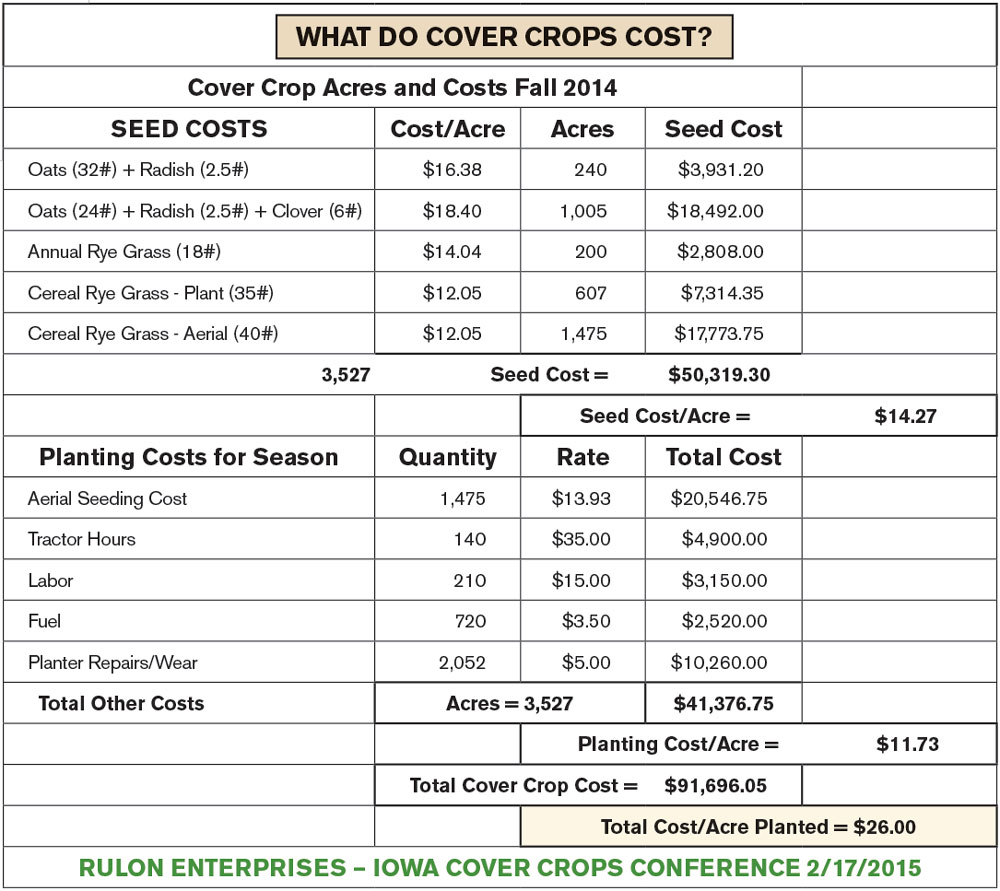 FIGURE 1. Ken Rulon shares the cost breakdown of his cover crops. Between the seed cost and cost of seeding — including labor — Rulon Enterprises spend $26 per acre on cover crops. Ken admits it’s tough to write the check to buy cover crop seed every fall, but the number crunching he’s done shows they’ll see a return on investment.

For Rulon Enterprises, the average cost of including cover crops in its rotation is about $14.27 per acre for seed and $11.73 per acre for seeding operations, totaling $26 per acre (Figure 1). The Rulons use oats, radishes, clover, annual ryegrass and cereal rye, with seeding rates varying between mixtures and how they’re seeded.

But when looking at the benefits, Ken finds there’s little to no chance of not getting his $26 back (Figure 2). 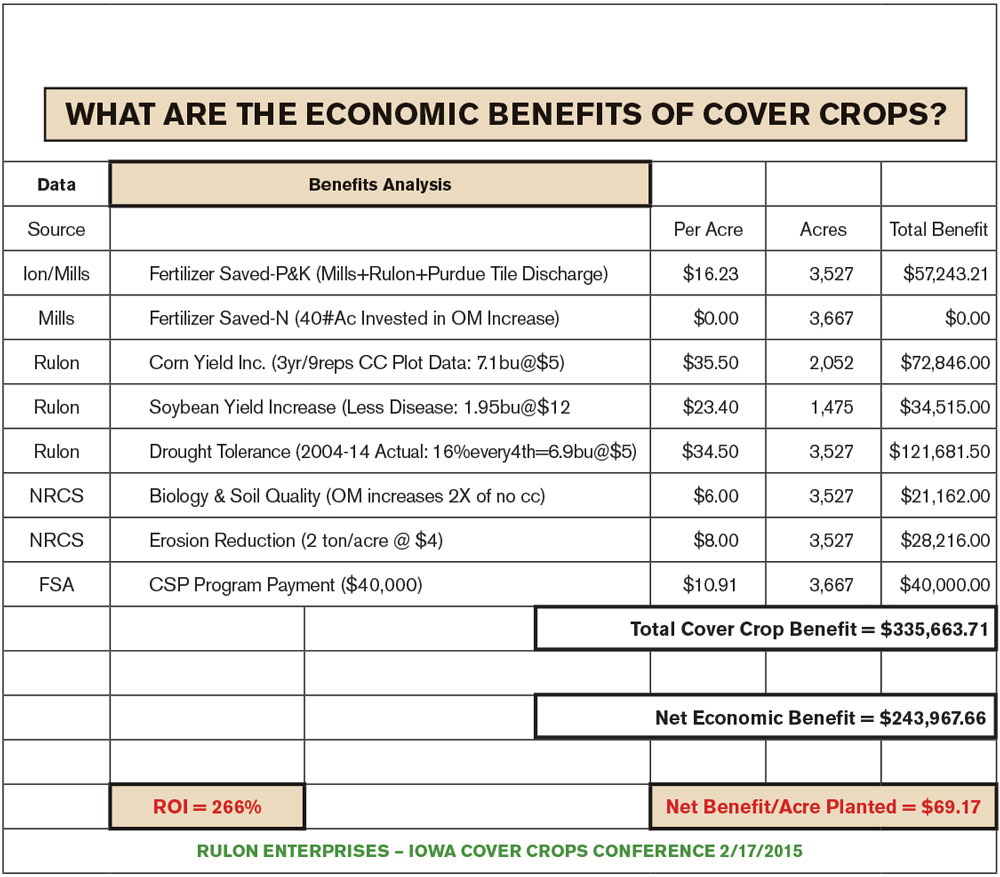 FIGURE 2. Each line item shows a benefit the Rulon family in Arcadia, Ind., is gaining from using cover crops in their continuous no-till system. Even if they cut the benefits in half, they’d still see a return on their $26-per-acre expense for cover crops, Ken Rulon says.

“You can slice every benefit category in half and we still calculate a 50% return on investment,” he says.

One category they’re saving on is their fertility program. Based on 20 years of 1-acre grid soil testing data and actual fertilizer use, as well as data from nearby no-tiller Cameron Mills’ farm and tile discharge data out of Purdue University, the Rulons are spending $16 less in phosphorus (P) and potassium (K) fertilizer per acre every year compared to Tri-State fertilizer recommendations.

Ken notes that since they’ve added cover crops, it seems the amount of P available to the plant increases, even without a prescription application.

Rodney, Ken’s cousin who developed their prescription fertility equations, stresses that they focus on 1-acre grid testing — and not crop removal — because with 36-40 inches of rain in a year, their area will normally see more nutrient leaching than is actually used by the crop. Using cover crops to capture those excess nutrients in the soil and prevent them from leaching into the water supply has great value, Ken says.

The Rulons also figure they capture 40 pounds of nitrogen (N) per acre, but are not reducing their N rates yet. Ken says they hope in the long run that it’s contributing to yield increases.

“In our plots, oats and radishes following soybeans produce the highest yields,” Ken says. “They capture nutrients and contribute to rapid increases in earthworm populations.

The Rulons are also seeing yields increase from their system. Comparing their 5-year yield averages to their county average, the Rulons’ soybean yield is 113% of the county yield average, and their corn yield is 114%.

Ken says the operation sees on average a 7.1-bushel corn yield increase when it follows cover crops vs. no cover crops.

They’ve also dedicated a 100-acre field to joint research with Purdue University and the NRCS since 2008. The multi-repetition strip plots compare corn that follows various cover crops vs. no cover crops, along with different N rates.

They do stand counts after emergence. Ken says they planted an average corn population of 33,000. For the corn that followed cereal rye the final stand was 28,500, while the corn that didn’t follow a cover crop had a stand of almost 32,500.

Three years of data for corn shows if the crop yields 7.1 bushels higher, at $5 per bushel the Rulons are capturing a benefit of $35.50 per acre.

Soybeans also gain a yield boost following cereal rye. Ken says they’ve tested it numerous times over the years and always see a 1.5- to 3-bushel increase. If the yield increase is 1.95 bushels, at $12 soybeans they get a benefit of $23.40 per acre.

The biggest benefits come during drought years. Ken says the farm experienced the three driest Julys in its history from 2011-13. In those years, their farm’s average yield was 130% of the county average, almost twice the normal difference. The biggest benefits are when the crop has the highest price.

The final benefits the Rulons are obtaining from their no-till, cover crop system include reduced erosion and increased soil biology and soil quality, which based on numbers from the NRCS, provide a $14-per-acre benefit.

Ken calculates the total benefit of cover crops on their farm comes to $69.17 per acre, for a 266% return on investment.

“It’s a little bit tough when you go to write Beck’s a check for $85,000 for cover crop seed in August,” he says. “But when we sit down and go through it, we just cannot find any data where the cover crop yielded less than straight no-till. So at some point you have to say it has some value.”

He notes these benefits don’t typically happen in the first year of cover crops. They’re the combination of many practices, including investment in drainage, variable-rate seeding, N application based upon yield goals, and of course, the farm’s 23 years of 100% continuous no-till.

Ken also adds that no-tillers must deal with some successes and failures with cover crops, and proper management plays a crucial role in achieving the benefits.

“We know for a fact that if we let cereal rye get way too big, and then plant soybeans too wet, there is a potential 5% yield hit,” he says.

Three Ways to Achieve a 266% ROI with Cover Crops

Achieve Your Goals with Cover Crops