Paul Tomlinson likes being different. He likes trying new things, and he doesn’t mind going out on a limb.

When the 28-year-old third-generation farmer decided to plant a cover crop and take a no-till approach to growing vegetables, he knew he might turn a few heads.

“You get some funny looks when you have it planted beside the road,” Tomlinson said. “People stop and say, ‘What in the world is this guy doing?’” 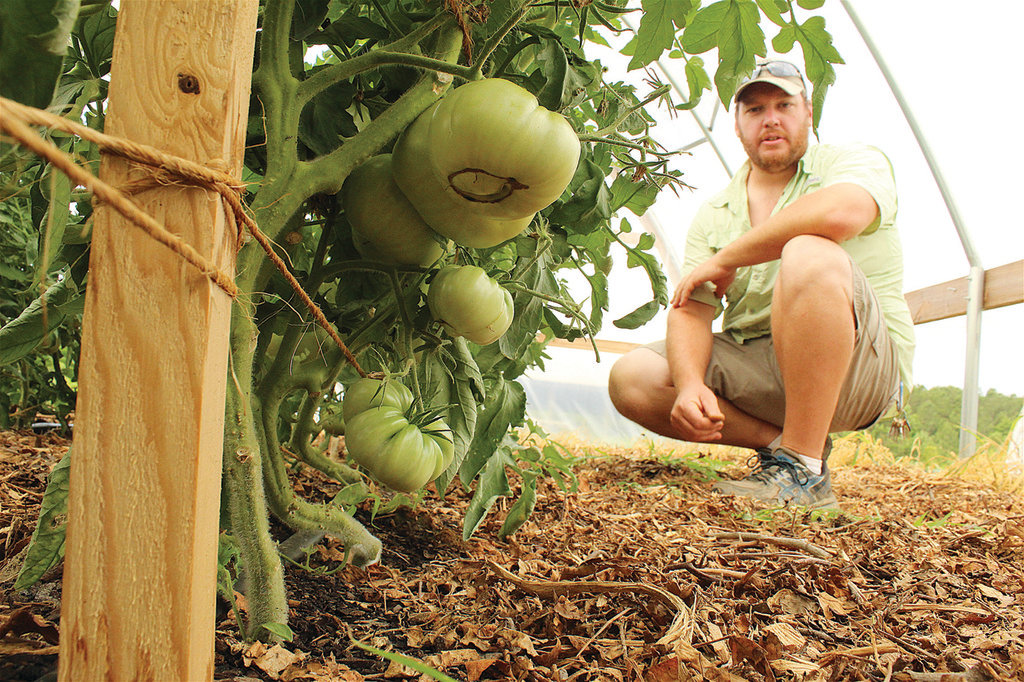 Farmers will traditionally till their land to create a good seed bed and eliminate weeds.

“People get into a habit of one way of farming. I’m not going to say it’s the right way or the wrong way,” Tomlinson said.

Tomlinson’s approach is to grow a cover crop of winter rye grass and let it grow about head-high. Then he rolls it flat into a mat several inches thick. The mat of dying rye acts as a mulch and keeps the light from the ground, which reduces weed growth.

Tomlinson then takes two approaches: strip till and no-till. In the strip till field, a narrow 8-inch-wide swath of the ground is softened up for the seeds.

“Instead of taking a disk harrow and disking the whole entire field and then bedding it up to set out, you are just making an 8-inch bed right here,” Tomlinson said. “In between, the rows stay hard, and they are supposed to stay weed-free if I had a good cover crop.”

In the no-till version, Tomlinson will drill holes through the mulch mat and into the soil, then plant seeds.

There are several reasons to take a no-till approach, but the biggest is conserving moisture.

“Every time you turn that soil over, you are releasing moisture into the atmosphere that you want to keep in the ground for germination,” Tomlinson said. “When the crop takes root, you want it to be there instead of having to irrigate or hope for rain.”

Development of soil biology is another benefit.

“Your soil is a living organism,” Tomlinson said. “Last year, before I put a cover crop on here, the land was bare and I walked from corner-to-corner, end-to-end, and I couldn’t find any earthworms. The first year of a cover crop, before we burned it down for planting this spring, I went through the field and dug, and almost every other time I dug, I started finding earthworms.”

What it told Tomlinson was that the land was actually building topsoil.

David Little, soil conservationist with the N.C. Soil and Water Conservation District in Wilson County, said he could talk all day about the benefits of no-till farming.

“No-till plus using cover crops is probably one of the best combination of practices that a farmer can do,” Little said. “There’s lot of reasons why it works so good. It’s not an overnight fix for problems. It is something that takes a little bit of time to get the maximum benefit. As you increase the soil organic matter, you will increase the holding capacity for the soil for moisture and nutrients. It helps to alleviate compaction. It pulls up nutrients from the ground.”

The additional moisture-holding capacity will keep the crops from suffering dry spells in the summer.

“It is more weatherproof. In the summertime, one of the problems we have is we don’t get these long, soaking rains,” Little said. “Usually it’s a thunderstorm. So when you till the soil, what usually happens is that thunderstorm comes down and loosens the particles, and then they seal. It seals the soil and no more water is going to go in. Instead of running in, it runs off, so now you are looking at an erosion problem. But if you have been doing no-till, now you have earthworm channels going to the surface, you have dead root channels going to the surface letting water in, and you also have a cover over the ground so that raindrop hits vegetation or dead vegetation instead of the soil. So the energy from that raindrop doesn’t disrupt the soil particles, it doesn’t dislodge them, so you end up with a more open soil that accepts more water. Instead of runoff, you get infiltration.”

“By doing that we get better weed control of annual weeds as well as better moisture retention in the soil. Also, we see it could have economic value as well because you are not driving over that land with a disk or a cultivator every so often,” Batts said.

Tomlinson is also using the no-till and strip till method in the greenhouse where he’s growing bell peppers and tomatoes.

Tomlinson has a 10-acre farm on N.C. 42 where he plans to grow a cover crop of sunflowers, cowpeas, buckwheat, sorghum sudangrass and other plants.

His plan is to let it grow to maturity, then roll it down flat and plant cabbage and collards right into the mat.

The mix should make for extremely fertile soil.

Tomlinson feels confident his approach is going to work. He said it’s adaptable to operations big and small.

“I’m young, and I hopefully have a long life ahead of me and I want to farm the way nature intended,” said Tomlinson, “I want to leave my farm in a better situation for my children to pass onto the next generation.”

Getting Paid to Raise Cover Crops