Indiana grower Jason Federer says long-standing use of cover crops is helping transition away from chemicals as he counts soil health the ultimate “long-term profit.”

Jason Federer says he’s been around cover cropping for as long as he can remember. He recalls watching his father frost-seed alfalfa and clover into wheat on their farm near Wolcott in northwest Indiana.

“That was the beginning of cover cropping, on a small scale,” he says. “But, now we’re trying to do it on all of our acres after I watched what it was doing for us.”

Federer says water infiltration, overall soil health and increased management flexibility are the biggest factors in his interest in using covers on the 4,000-acre corn, soybean, wheat and alfalfa operation 90 miles south of Chicago. Also, he says extensive cover use hasn’t shown a yield drag on his row crops.

“The flat-land farm is primarily a uniform, dark, medium prairie soil with a tendency to poor drainage,” Federer explains. “Let’s just say we have more problems with too much water than with not enough, and over the years, I’ve watched infiltration improve behind our cover crops.

“It’s hard to quantify, but I’m convinced the practice is helping overall soil health, just from the abundant population of earthworms we find. Also, when you pick up a handful of soil it just smells ‘healthy’ and is very friable,” he explains. “I also see steady improvement in runoff reduction after big rains.”

Today, Federer has 250 acres certified organic and another 800 in various stages of transition.

“I’m into organic thinking and go with the premise that something will grow on bare ground regardless, so its best if I can guide what is growing out there,” he explains. “It’s not so much what I see year-to-year, but I know it’s nature’s design, so I’m trying to work with it instead of fighting that design.”

Federer says he consistently uses cereal rye as a winter cover behind corn ahead of soybeans.

“It’s almost fool proof as long as the weather doesn’t hinder you,” he says. “Ideally, I’d be planting cereal rye right behind the corn harvester, but we’ve planted as late as January with good success.”

“I go with the premise that something will grow on bare ground regardless, so its best if I can guide what is growing out there…”

Federer plants the rye at a bushel per acre, along with 1 ton of chicken manure. Due to more extreme weather and for better timing and workload, interseeding in corn during cultivation at V4 or V5 stage is being initiated on all corn acres. Interseeding allows for longer cover life and better establishment to provide a more improved stand through the winter.

“If we’re on organic fields, I’ll seed 2½ -3 bushels per acre if I’m planning to roll-crimp to terminate the crop, rather than using chemicals,” he says.

While cereal rye is a useful and dependable standby as a single species cover, Federer is also striving to incorporate interseeded cover mixtures in his corn fields to improve the above-ground cover and the diversity of plant growth and rooting habits in the soil. 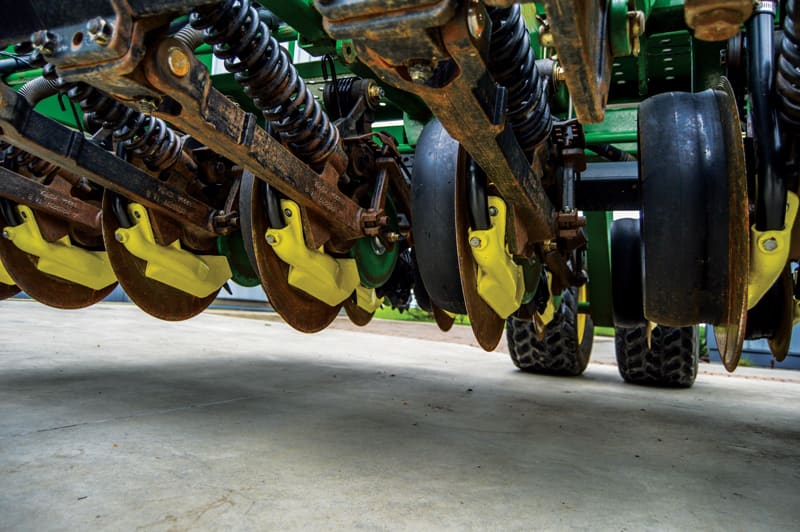 The biggest challenge is formulating a good cover strategy after soybeans, he explains.

“We’ve flown on covers over soybeans before, and if the conditions are right, it works great. If conditions work against us for some reason, we have a lot of wasted seed and application expense,” he says.

“One year, we had a late bean harvest and good growing conditions for the oats and rapeseed we were using for a cover, and it looked like silage coming out of the back of the combine. We were cutting 6-8 inches of cover as we harvested beans. 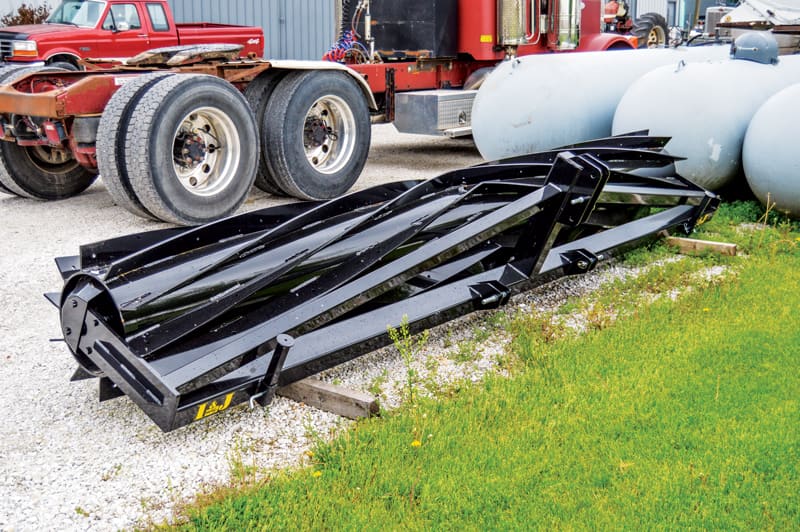 ROLLER CRIMPER – As Federer’s management moves away from burndown chemicals, especially on organic acres, his new roller crimper will be taking on additional cover crop termination chores. Federer says covers have helped him significantly reduce chemical use, even on conventional acres.

“It didn’t hurt the beans, but harvesting was certainly no fun. Ryegrass would have been a better choice as a cover that year because it has drier biomass on top,” he says.

Federer also says a legume in the mix ahead of corn has worked well for him.

“We’ve had better luck drilling spring peas and oats when we can’t get something established early enough in the fall to overwinter successfully,” he says. “We try to choose covers ahead of corn that have more fragile residue, so if they do get big, I’m not fighting a lot of that no-tilling, or where I till organic ground in the spring.

“On the organic fields, ideally we’d like to roller crimp before/after planting soybeans,” he explains.

Federer says using covers has provided enough weed suppression that he’s been able to reduce herbicide chemical use and enabled him to use “weaker” herbicides.  He is trying to remove those chemicals with the longest-lasting effects first, opting for a quicker breakdown.

“The chemicals should only be used to give the crop the upper hand, not to scorch the earth because it looks cleaner to antiquated standards,” he says. “I’m trying to move away from chemicals, because I don’t think we’re doing ourselves any favors relying so heavily on them.

“It’s always nice to see the yield monitor jump, but in the end it’s what you’re making per acre that counts...”

“In our area, I think we’ve selected for waterhemp by using glyphosate. We have no Palmer amaranth, but waterhemp is prevalent. Still, on my organic fields, I don’t have waterhemp, and it’s not like the seeds aren’t out there.”

Currently, Roundup is only used ahead of corn to burndown grasses. Not many years ago, Federer says he sprayed it on every acre multiple times. Gallons of that product have been cut back tenfold. Select is currently used to burndown grass ahead of soybeans.

Conventional chemicals have worked well for Federer up to now, but he is pushing toward roller-crimping, mowing, light tillage, etc. for cover termination.

He says the organic market provides a premium for crops, plus it allows a grower to cut inputs.

“The economic benefits are obvious: A premium for the product and a management recipe that requires fewer inputs. You don’t have near the expenses every year, so you don’t have to make as much.

“If I can make enough on a corn crop organically, I don’t have to farm that field the next year if I can’t get the crop in for some reason. I can put it in covers for a year; I don’t have to take a crop off every field every year,” he explains. “I like money like everyone else, but the flexibility of being able to go to covers is also nice.” 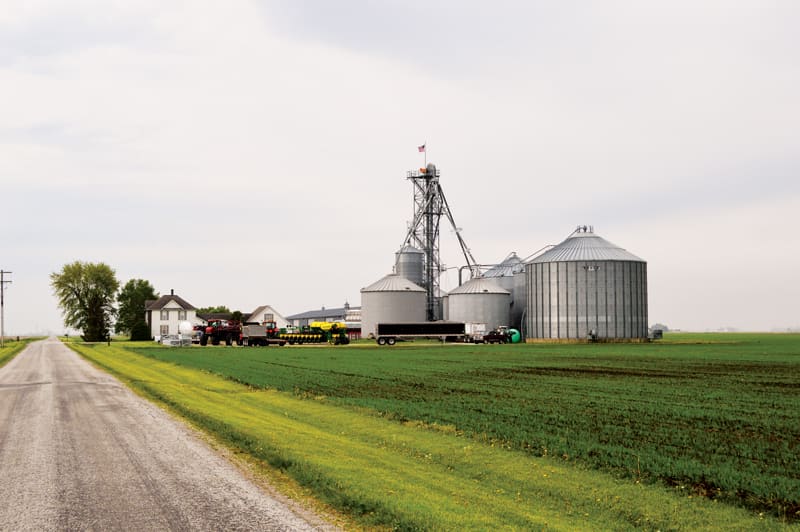 FARM HQ – Cover crops are nothing new on Jason Federer’s operation, which is home to 4,000 acres of corn, soybeans, wheat and alfalfa. He says he remembers his father frost-seeding alfalfa and clover into wheat fields and explains that was the beginning of using covers in their operation.

Federer says weed suppression from covers is a big key to those reduced inputs in his operation.

“Those that really stand out are cereal rye ahead of soybeans, and alfalfa ahead of corn. It’s just phenomenal what alfalfa will do ahead of corn in addition to the fertility it adds to the soil,” he explains. “Similarly, we’ve used a clover mix ahead of corn that worked, but not nearly as well as the alfalfa.”

Alfalfa is also a go-to transition crop for Federer as he moves acres into organic certification.

“As we go into a transition, we’ll plant winter wheat and frost-seed alfalfa into that. We’ll take a few cuttings to pay some bills and leave some to provide additional organic matter in the ground,” he explains.

“I’m just trying to do a good job for the soil, because I believe soil health itself is a long-term profit.

Federer’s yields haven’t suffered from using covers, but he explains his yields are used to compare practices on his acres alone.

“Everybody has winners and losers each year.  If someone wants to talk whole farm averages for a given area under certain management practices, that can be constructive, but there are only a few people I’d trust to give the bad along with the good.

“I’ve harvested enough of others’ fields, both custom and to help a neighbor out, with my machine I calibrated, to be satisfied with my own yield trends. The only times when yields give me much cause for concern or excitement is when they’re unexpected — either good or bad — and I don’t know the reason why.

“It’s always nice to see the yield monitor jump, but in the end, it’s what you’re making per acre that counts.”

Tools of the Trade

Federer says he frost-seeds with a Valmar 246 air boom seeder.

“I spread cereal rye and oats with a Valmar 8608 air-boom spreader, then work them in shallow with a Lemken Heliodor compact disc,” he explains.

Interseeding is handled by a Hiniker 6000 cultivator toting a Valmar cover crop seeder. Dan Crummett has more than 30 years in regional and national agricultural journalism including editing state farm magazines, web-based machinery reporting and has an interest in no-till and conservation tillage. He holds B.S. and M.S. degrees from Oklahoma State Univ.