Experimental Farming in the Name of Soil Health

My name is Steve Siverling, and I plant corn, soybeans and a few small grains on 350 acres in northern Wisconsin.But what I am growing is soil health; I am a biological farmer.

I began my soil health journey and evolution to a biological farmer 20 years ago when I purchased 80 acres near my farm. The soil pH was low, around 5.5, and there was less than one percent organic matter. I couldn’t make immediate improvements to the land that would allow me to plant a crop that could tolerate those conditions, but I had to try something.

My agronomy consultants talked to me about soil health and building soil structure, and I listened. I added one ton per acre of calcium lime to half the ground, manure to the other half and started a corn-soybean rotation. Behind each corn crop, I chopped the residue and applied manure, both in the fall and spring. Behind the soybeans I planted a cover crop of cereal rye after every harvest.  And after several years of this treatment, I started to notice a change.

When I first added the 80 acres, I still did a lot of moldboard plowing and I noticed that on the new ground, when I dropped the plow into the earth, it was like plowing concrete. After several years of the alternating manure and cover crops, I became aware of how the ground worked during tillage; it became mellower. I began to observe other benefits, particularly from the cover crop. As expected, there were periods of drought that came during growing seasons, but, after implementing cover crops, fields remained greener and yields didn’t drop as much. 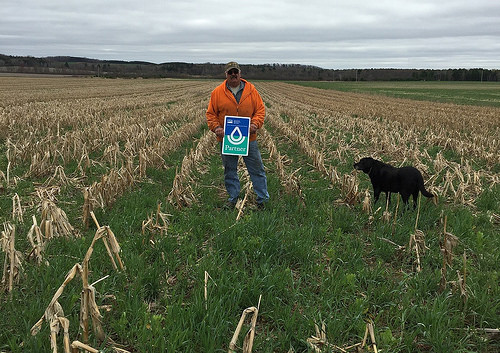 About that time, I read an article in a farm paper explaining for every 1 percent more organic matter your soil has, the more water-holding capacity the soil would have.

I’ve also noticed the high quality of the grain that comes off my fields. The food-grade soybeans are at the top of their protein scale with good test weight, which means no deductions from the food-grade premium and the test weight of my corn is in the 54- to 58-pound range allowing me to sell corn at a premium—which adds up fast for a small farmer!

I have learned a lot about cover crops over the years. I learned that rye roots help break the soil and supply air into the ground, supplying food for microorganisms, especially earthworms.

Earthworms navigate the soil, and their waste, or worm castings, are very high in nitrogen. A combination of rye and the slow release of nitrogen, helps crops grow during the season. Cover crops build the organic matter, which results in healthy, productive soils. In return, I grow better quality crops with less inputs, especially purchased fertilizer.>

This year, I’m working with a seed company to do an experimental cover crop plot on my farm.

The most recent soil test showed organic matter to be 2.5 percent and the pH was 7.0. I can now grow a beautiful crop of alfalfa!

I am very interested in the various combinations of cover crops. For us farmers in Northern Wisconsin, we are limited in what we can use because of the length of our growing season. Am I going to be able to get a dollars and cents return-on-investment for this? I don’t know, only time will tell; here’s hoping. The 2016 weather and growing season will also impact the results of our crops. What an adventure being a farmer, for sure!

Note from NRCS: The NRCS thanks Steve for sharing his firsthand successes with cover crops. Our goal is to share ideas on how to implement soil health principles and cover crops on your farm. Steve Siverling has seen many benefits on his farm through the use of cover crops including increased soil structure and organic matter, less soil compaction and erosion, improved water holding capacity in the soil, improved quality of crop test weights and protein, less purchased fertilizer inputs, potential grazing during fall and spring, increased wildlife habitat, weed suppression, and breaks in pest cycles. “Steve is an active member of our NRCS farmer network with cover crops in Chippewa County and has done a great job networking with other farmers and helping NRCS advance the soil health movement one farm at a time,” said Tammy Lindsay, Chippewa County District Conservationist.

The Dollars and Cents of Soil Health: A Farmer’s Perspective